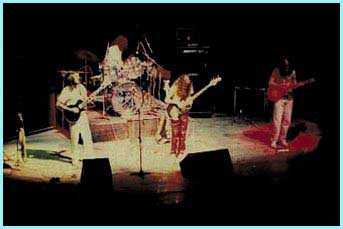 Andre Gomes, Carlos Martau, and Alexandre Fonseca, a bassist, guitarist, and drummer, formed Cheiro de Vida after some garage jams in 1978. The band was formed in 1980 on Rio Grande do Sul in the south of Brazil. They performed at a variety pubs and theaters. Paulo Supekovia now plays guitar. They moved to Sao Paulo in 1982 and recorded an album with Brazilian singer Diana Pequeno. This became her touring band that toured all over Brazil. The band returned to Porto Alegre at the end 1982 and recorded a second time with Bebeto Alves on the live album “Noticia Urgente”. They also became Victor Ramil’s band and continued Cheiro de Vida’s activities. The following year, they recorded their first album “Cheiro de Vida”, but it would not be released until 1984. To finance the album, 850 bonus was sold to friends. ACIT, a small record company, offered to promote and distribute the album in exchange for it being released on its label. It was accepted and it proved to be a bad business decision that took many years to heal. The band spent 10 years trying to get its masters back after not being awarded any royalties or proper promotion. The same year, Cheiro de Vida was made a five-man band with Dudu Trentin as keyboard player. It was a great time to start writing and recording music for plays such as “Cem Modos”, a popular Theater Company that traveled the country. They decided to move to Rio de Janeiro to try their luck. Dudu Trentin, who moved to Austria to start a solo album, moved in with them all. They were part of a back-up band at Jazzmania in 1987, which was the best place to listen to instrumental music. Anytime there was an open slot, they would play their material. Andre Gomes was also able to play the sitar, proving another side of his talents as a musician. Jazzmania was a success and word-of-mouth spread quickly. It soon gained a loyal following from fans everywhere they played. Pepeu Gomes and Ricardo Silveria were just a few of the top Brazilian musicians who began to visit them to see if they were good. They became close friends, as did many others. Cheiro de Vida encouraged them to sing a few songs, such as “Suave Magica”, and “Meninos”, with Andre being their vocalist. Warner Records was interested in recording them, but the budget of US$ 22,000 meant it was impossible to properly record. Instead, a demo tape of 6 songs was recorded at the “Nas Nuvens”, which has not been released to date. Band members began to collaborate with other artists to earn some extra money to support their lives. Alexandre and Andre were recording for PepeuGomes, while Martau was helping Marina with her “Virgem” album. Paulo Supekovia returned home to seek new pastures and Cheiro de Vida found them back at the place where they had started the Trio. 1988 began with a lot more concerts. They started at Rio’s Planetario da Gavea before moving to Ipanema’s Theater. The band then went to Porto Alegre to record their first show at OASP. The band was unable to release the album, and Martau joined Djavan on a worldwide tour that took them from the USA to Japan, Europe to Japan, and back to the USA. They quickly brought Dudu back to the band and began writing and playing with a more jazzy approach. On 1992, they started playing clubs again and recorded what would be their second studio album. Ricardo Silveira was a guest on one track. The album was nearly complete when the band decided to take a break. Martau opened his guitar clinic, becoming a highly sought-after luthier as well as a very popular live sound engineer. This can be seen in his work with artists like Frank Gambale and Mike Stern (which often asks for him at once), Cassia Eller, and now Marina Lima. After leaving Pepeu Gome’s Band, Andre Gomes recorded some soundtracks. He also collaborated with Ze Gomes, the violin player, to record “A Idade dos Homens”, a pop-rap album. His wife Hannah Lima is his producer today. Alexandre Fonseca, who left Pepeu to play with Kid Abelha’s pop band, can now be found playing in the industrial metal band “Infierno”, as well as recording tracks with Marcio Rocha for his Juno album. Dudu Trentin just released a solo album entitled “Wherever I Go” and has his own website www.guiamarau.com.br/dudu. They are still expanding and talking about a reunion in the near future. Their unreleased 1988 album was made available in September 2000. A few more are being prepared as you read this. from http://www.progressiverockbr.com