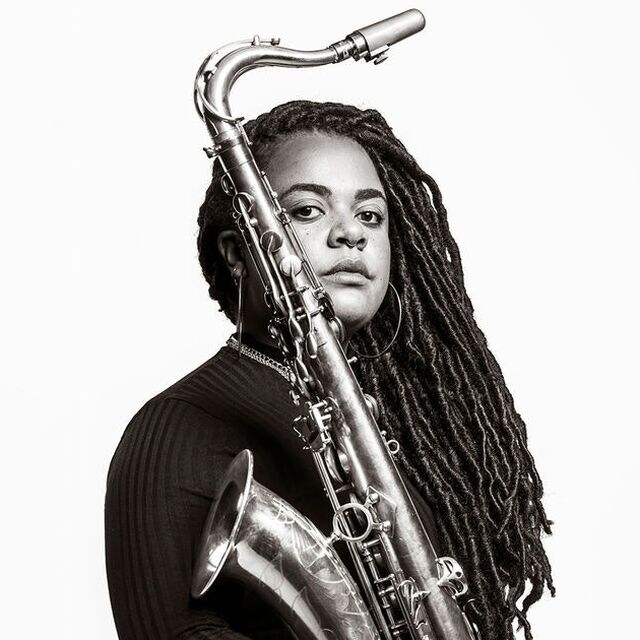 Chelsea Carmichael, a saxophonist, composer, and arranger, is an understated innovator, educator, and quietly adds her own contribution to jazz’s evolution on these islands. She is a warm, hypnotic player who adds subtle and thoughtful improvisation to all she does. She has been part of Mercury-nominated bands, including SEED Ensemble’s 2019 “Driftglass” and she currently plays with Theon cross and the highly-popular Outlook Orchestra. They play for large audiences at major festivals and venues. She arranges and writes for her own band. Shabaka Hutchings, Primo cultural instigator, saw her potential and invited her for the first release on Native Rebel Records. They worked together on a set of songs. She recorded them at RAK studios along with Eddie Hick (Sons of Kemet), Dave Okumu (“The Invisible”) and Tom Herbert (“The Invisible; Polar Bear”). The resulting recordings make up her debut album, The River Doesn’t Like Strangers, 2021. Her dad told her the title of the album when she was younger, while they were visiting Jamaica. The Rio Grande runs through Grant Level in Portland’s central area. “The river has a reputation of not being kind to new people. “My dad is not superstitious so that was something that stuck out to me.” Chelsea and Shabaka knew one another in the same way that people connected by their communities know each other. The pair hadn’t been together since a May 2019 London show at the Total Refreshment Centre, where they were joined by South African band The Brother Movers On. Although she’s part the so-called “new London jazz scene”, she recognizes that it’s not new. There are many sounds, and the notion of a “scene” obscures the nuances and complexities of large groups of people who come from different backgrounds and are moving in different directions. She grew up in Warrington, England with her parents who were dancers on the Northern jazz/funk scene. She also listened to her father’s records and was exposed to the Jamaican musical culture. She started with piano, and then she learned to play the saxophone. She says that this experience was crucial to her development. The whole experience was extremely inspiring and really motivated me. This was the first time that I realized it wasn’t just about practicing, but also having a good time with friends. It was a huge part of the direction that I’ve been going in.” The Manchester jam sessions at Indigo Bar and Matt and Phred’s provided a space for her to expand her playing outside of the confines of her bedroom and practice room. I knew I had the ability, but it was the confidence to take the next step. These moments can make or break a young person. She says that if you don’t feel welcomed and warmly received at a jam session, you may never return. “The north is great for this anyway. I was greatly helped by northern musicians.” She moved south in 2001 to study music at Trinity Laban Conservatoire of Music. Whilst she’s Conservatoire-trained as a musician, she’s self-taught when it comes to composing for her own projects – one of which sold out London’s Jazz Cafe when they performed their tribute to John Coltrane’s ‘Giant Steps’ on the record’s 60th anniversary. She says, “Composition was a solo, self taught adventure, literally in the room where I am typing.” It’s been trial-and-error. Writing is a long and difficult process. I’m only at the beginning. There is so much more to discover.” This exploration includes a special focus on one rich seam. She says, “I’ve been really digging into the lineage Black British excellence in jazz,” referring to Courtney Pine’s back catalog and Nu Troop’s 1981 album, ‘Migrations.’ With Denys Baptiste Jason Yarde, Soweto Kinch, she also mentions the obscure parts of Courtney Pine’s archive. The Conservatoire path is American-focused. This is where the music comes from. However, we also have our own history and heritage here so we don’t spend too much time digging into it. It’s her personal project to find out the history of this country. It’s a sound that she loves, and she’s excited to be a part of it as both a musician and an educator. She is the Musical Director of the NYJO Jazz Messengers and has been giving lectures at Goldsmiths on Black British music. She’s still gathering information, but it’s a part of her research that she uses to inform her playing and as a composer. from www.chelseacarmichael.com