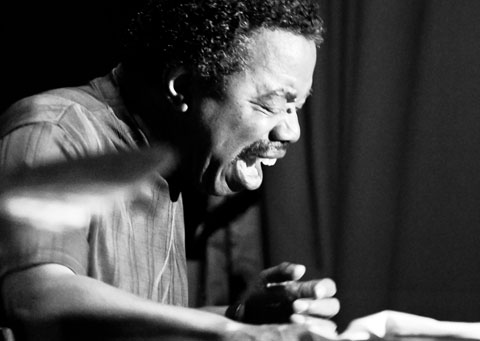 Chester Thompson’s musical style is described as earthy, energetic, and exciting. He brings an incredible combination of talent, versatility, and skill to any musical setting where he is found. This ultimately drives others around him to their highest levels of expression. Chester Thompson is now back in band leadership after 25 years with Santana, and 10 years with Tower of Power. Chester began playing the piano in his Oklahoma City home at age five. He would pick out the melodies from radio songs. His parents quickly recognized his talent and set up formal lessons for him. He soon began to double on the organ, and would often accompany his church’s choir. He discovered jazz music at the age of 13 and it quickly became a major part of his musical development. He decided at 16 to use the Hammond organ only and follow the musical revolution of 1960s. Rudy Johnson, a saxophonist approached Chester while he was still in high school. He had heard Chester and felt inspired to get in touch with him. Chester was 19 years old when he realized he wanted to make music a career. He packed his bags and set off with Rudy and his band. The band made it to San Francisco during their national tour. Chester fell in love with San Francisco so much that, after the Rudy Johnson Band split up in 1969 Chester moved to the City by the Bay. He began working at the bank while trying to break into the local music scene. Soon, Chester was hired to be the regular keyboardist for Jules Broussard. He soon formed his own quartet that was popular at Jack’s on Fillmore. Chester’s first recording as a leader was Power House, which was released by the Black Jazz label in 1971. A member of Tower of Power, who saw Chester at a bar, approached Chester and offered him a place in the band. Chester would have to return to the road, but the offer was compelling enough to allow him to make another important decision in his musical career. Chester Thompson was TOP’s most energetic R for the next ten decades.