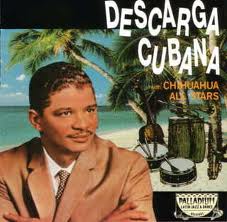 Guirero Osvaldo Chihuahua Martinez, timbalero, is leading the group. Born in Cuba, his first visit to New York was as a member Jose Fajardo’s Orchestra in 1959 for an engagement at The Palladium. Chihuahua was a sideman for many great jazz musicians in the 1960s and performed with every Latin American musician, including Ray Barretto and Cachao. He formed his own group, which included “all stars”, in 1964. Two LPs were produced. from http://www.freshsoundrecords.com