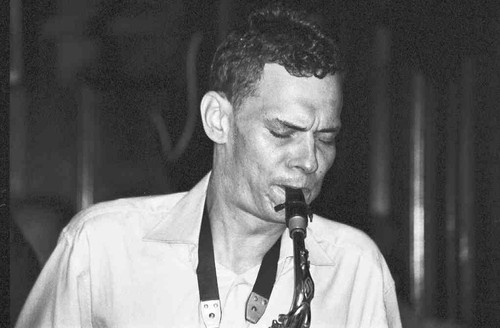 Let’s face facts, despite its rich history, myths, legends, black and white photographs, recordings, movies, and even the films, the saxophone was not the most popular instrument of modern music-makers in the early nineties. Chris Bowden could have easily remained one of the undiscovered backroom musicians in the British scene. He was a skilled sax player, an experienced arranger and composer. He could have been a regular UK jazz player, playing in small clubs with 30-40 people. He chose neither. Chris Bowden chose to create ‘jazz’ that was both contemporary and relevant, as well as sequenced, sampled music. He refused to be obscured, but he gave Kenny G the thumbs-up. He released “Time Capsule” (Soul Jazz) in 1996 to great critical acclaim. Bowden is a great talent. He has created space jazz with the rigour and elegance of a classicalist. It’s a mix of forbidding and kitssch. Many people, mainly those who knew him well or had read the record sleeves credits, knew this. Bowden began his professional career during the acid jazz boom, playing shows and sessions for Talking Loud’s K-Creative. He continued working with Simon Richmond (Palm Skin Productions), on Mo’ Wax. He also played arrangements for Jessica Lauren (Soul Jazz), and Jhelisa (Dorado), adding a uniqueness to these projects that could only be recognized as his. He also helped 4Hero to develop a more organic, jazz-soul approach to drumming after ‘Time Capsule was released.