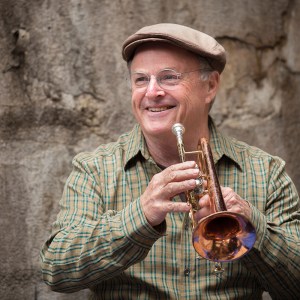 CHRIS SAUNDERS is a prolific singer-songwriter and cornet player. He was nicknamed “Big Skin” in his early years. Over the past 40 years, he has performed and fronted many bands, resulting in a style that can be described as having one foot in Blues and the other being in Jazz, Rock, Cabaret and experimental music. A pinch of Howlin’ Wolf and a bit of Tom Waits, he is both. He credits Dr. John, Tony Bennett and Joe Williams as being fundamental to his growth as a singer and artist. His vast soul and melodic proficiency are enhanced by his humorous sense of humor. His stage comedy skills and his ability to improvise are a crowd pleaser. He is a major player in the SF Bay Area scene and has shared the stage with many A-listers, as well as notable sidemen or studio musicians, over his long career. There are 4 recordings that he has available on CD and in download format. His latest release, “Outside My Window”, is available on the Bmoki Music Label. It features: Ken Cook-piano and Michael Aragon-drums; Rob Fordyce-electricbass; Luis Carbo – Percussion; and Rob Fordyce -electric bass. Outside My Window is a departure form Chris’s previous original recordings. It features songs by Percy Mayfield/Gene McDaniels, Eddie Harris/Gene Waits and Herbie Hancock. from https://chrissaundersband.com