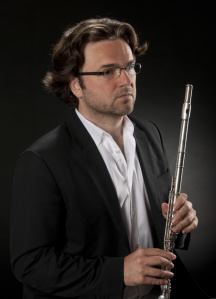 Christian Artmann is a New York-based composer and flute player. He is passionate about jazz and breaking musical boundaries. Artmann grew up in Austria and Germany listening to classical music. As a teenager, he was invited to perform at the Aspen Music Festival. Claudio Scimone, Lawrence Foster, and Artmann gave solo recitals by Hindemith, Debussy and Bartok. Artmann became more and more fascinated by composition and improvisation and decided to pursue his musical passion. After studying at Berklee College of Music, Boston, and working with the Vienna jazz scene, Artmann made his move to New York in 2011 and released Uneasy Dreams to great critical acclaim. In 2015, Sunnyside Records released his follow-up recording, Fields of Pannonia. It explores the influences of Bach and other 20th-century classical musics to Wayne Shorter. All About Jazz writes that Fields of Pannonia is “rooted” in the belief that art can and will go as far as your imagination will allow. The album is described by the National Flute Association Quarterly as a “mythical voyage in sound”. Artmann recorded his latest album, Our Story, in the summer 2017. He was joined by long-time friends Laszlo Gardony (piano), Johannes Weidenmueller on bass, Jeff Hirshfield on drums, and Elena McEntire on voice. Artmann’s Buddhist faith is evident in Our Story, which combines a rich, inviting harmonic palette with strong grooves that are equally at home in straight ahead jazz, funk and Brazilian music. Sunnyside Records will release the new album on May 25, 2018. Sunnyside Records will release the new album on May 25, 2018. Artmann was educated at Harvard Law School, Berklee College of Music, and Princeton University. Artmann has performed all over Europe, including at the Konzerthaus in Vienna and Prague’s Smetana Hall. He also appeared at the Django Reinhardt Jazz Festival in Paris, as well as other clubs in New York and Boston. Artmann is a Miyazawa Artist and an ASCAP member. He plays the Miyazawa flutes and Kotato flutes, and uses Applied Microphone Technology microphones. from https://artmannjazz.wordpress.com