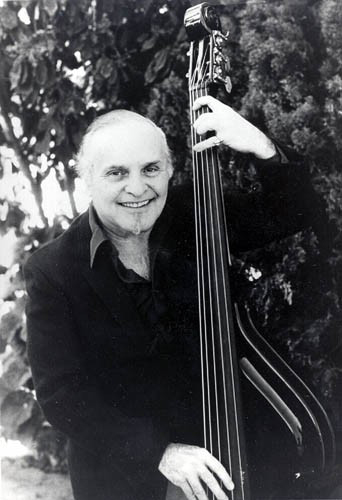 Born in New York City, Jackson began at the age of seventeen as a clarinetist, but quickly changed to bass. Jackson performed and/or recorded with Louis Armstrong, Raymond Scott, Jan Savitt, Henry Busse, Charlie Barnet, Oscar Pettiford, Charlie Ventura, Lionel Hampton, Bill Harris, Woody Herman,Gerry Mulligan, Lennie Tristano and others. He is perhaps best known for his spirited work both with the Herman bands, and as a leader of his own bands, big and small. In the 1950s, Jackson worked as a studio musician, freelanced, and hosted some local children’s TV shows: Chubby Jackson’s Little Rascals,which was seen weekday mornings on WABC TV Ch. 7 in NYC from Monday March 23, 1959, to Friday July 14, 1961, and The Chubby Jackson Show, Saturday afternoons on WABC TV Ch.7 from July 22, 1961, to August 5, 1961. Jackson would host his last two kids’ TV shows for WOR TV Ch.9 in NYC “Space Station Nine,” which was seen weekday evenings from Monday January 1, 1962, to Friday January 26, 1962, and he briefly served as the fourth and last emcee of WOR TV’s Looney Tunes Show/The Chubby Jackson Show weekday afternoons. The last series was seen from Monday January 12, 1962, to Friday June 14, 1962. (Information can be found on Jackson’s local NYC kids TV shows in The NYC Kids Shows Round Up section of “TV Party.Com”) In 2000, Jackson was inducted into the Big Band and Jazz Hall of Fame. He died in Rancho Bernardo, California (in the Poway area), at the age of 84. His son Duffy Jackson is now a prominent jazz drummer and appeared in the 2008 film, “Revolutionary Road” as a 1950s musician. His daughter Jaijai Jackson, noted radio personality and jazz promoter, created a social community dedicated to her father’s contribution to jazz and the entertainment world entitled The Jazz Network Worldwide. This is where musicians from all over the world find each other and network with all the supporting roles of business that gives jazz its heartbeat. from wikipedia