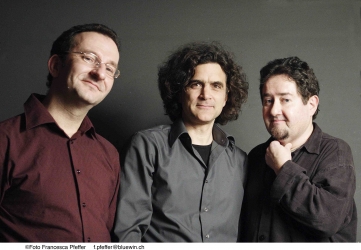 The Cholet-Kanzig-Papaux Trio was formed in February 2002 at Auxerre, where Jean-Christophe Cholet invited them. It allowed the musicians to come together around the pianos music and then develop naturally into a shared reflection. Jean-Christophe Cholet, a remarkable, unclassifiable composer and pianist, combines listening, harmonic sophistication and the art and nuance of timbres with a marked sense for melody. Marcel Papaux and Heiri Kanzig create some of Europe’s most beautiful rhythms. Their individual development has allowed them to share the stage with Billy Hart, Michael Brecker and Dewey Redman, Joe Lovano as well as Franco Ambrosetti Michel Portal, Arthur Blythe, John Scofield, John Scofield, John Scofield and John Scofield. The three musicians are able to communicate well on stage and in the studio. They play with ease and pleasure, displaying sensitive playing and a high level of awareness about sound that makes the most of each other’s intentions. Their fourth album, “Beyond the Circle”, (2008) confirms the aesthetic direction of the trio and clarifies its identity that it has developed over the years. It is the result of a great collaboration with Charlie Mariano, an American saxophonist. This album was released by Enja Records on March 2006. Harmonia Mundi). The next program will be created during an artist residency at Bird’s Eyes’, Basel (CH) in August 2010. New CD-Release “Connex”: Autumn 2011. from http://jeanchristophecholet.com