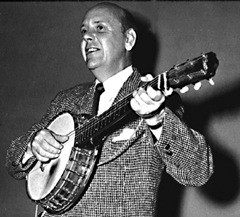 Clancy Hayes was a great singer in the Dixieland revival movement. He was better than any musician who feels the need to sing. From 1927 to 1938, he was a regular fixture in San Francisco. He appeared regularly in clubs and on the radio. In 1938, he met Lu Watters and performed for two years with Watters’ big group. Then he joined the Yerba Buena Jazz Band and played ten years. He was primarily a rhythm banjoist, but occasionally on drums. His greatest success was while singing with Bob Scobey (1950-1959). Hayes was a member of the Firehouse Five Plus Two, Turk Murry, an early version the World’s Greatest Jazz Band. He also worked with his own bands in the 1960s. Clancy Hayes was a leader in Verve (1950), Audio Fidelity(60), Good Time Jazz (1963), Delmark and ABC-Paramount (1969). He helped to make songs like “Oh by Jingo,” and “Ace in the Hole” more popular in the trad music world. Allmusic