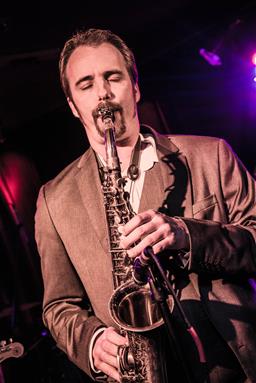 Clark Gibson, a jazz saxophonist and composer, was recently appointed director of jazz studies at Northeastern State University. His forward-thinking music is deeply rooted in the music of jazz musicians of 20th century, Western classical music history, and his personal experiences as well as musical traditions across cultures. Clark began his professional career in Denver, Colorado, performing popular music genres like jazz, funk and blues. He also formed the Clark Gibson Quartet, which was nominated by Westword Magazine for “Best Jazz Group Colorado”. The group released their first CD, “The Offering”. He continued his musical journey by performing with Edgar Winter’s horn section, and touring the country with the Tommy Dorsey Orchestra. Clark earned his Bachelor of Music degree in jazz from Cornish College of the Arts, Seattle, WA. During his studies, he was busy performing and teaching private students. Clark released his second album, “Iapetus”, on Pony Boy Records in 2010. It featured his latest compositions and arrangements. Clark received his masters degree and doctoral degree from the University of Illinois between 2012-2015. He recorded his third album as a leader, which he titled the “Old Style Sextet”. The cd was well received and received national airplay by BluJazz Records, based in Chicago, IL. He performed and researched the music of Charlie Parker while at the University of Illinois. He has added a new dimension to his performing and recording career through this project. His ensembles combine instruments from both the jazz and orchestra traditions. from https://academics.nsuok.edu