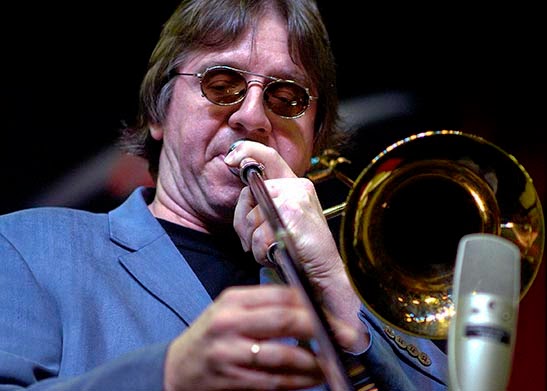 The trombone isn’t an everyday instrument, but it’s a versatile one-instrument instrument that can be used in conjunction with the trumpet, sax, and piano. Conrad Herwig is one of the few musicians who has embraced the trombone and helped to promote jazz’s continued development. Herwig was able to practice his trombone skills in many big bands including Buddy Rich, Clark Terry and Mel Lewis, as the trombone is always present in horn sections. Slide Hampton’s World of Trombones featured him, and Mario Bauza’s Afro-Cuban Jazz Orchestra was his first. His interest in Latin music grew during his time with that orchestra. This interest led to The Latin Side of John Coltrane, and Another Kind of Blue. The Latin Side of Miles Davis. Both albums were nominated for Grammys. His latest CD Sketches Of Spain Y Mas continues his quest for Latin roots. Herwig was awarded the Paul Acket Award for ‘Artist Deserving Wider Recognition’ last year. Herwig has been playing with Eddie Palmieri’s group for many years, and this is where he’s gained his most recent experience in Latin jazz. He also produced a Wayne Shorter Latin album. In releasing individual projects, he has been closely involved with Brian Lynch (trumpet player for Eddie Palmieri’s group). Herwig is currently playing with the Latin Side Band. They released a CD in 2010 featuring the musicians, also known as the Latin Side All Star Band. The Creative Commons By–SA License allows for user-contributed text. It may also be available under GNU FDL.