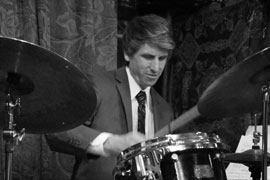 Craig Wuepper is a jazz drummer and lives in New York City. Born in Michigan to a musical family, his mother and grandfather were musicians. A scholarship was granted to graduate high school and study with Randy Gelispie, East Lansing (independent from MSU), 1991-1993. In 1994, moved to Manhattan to study at Manhattan School of Music. He was awarded a partial president’s scholarship. From 1995-1998, was a regular sub at Augies Jazz Bar, where he played with Cecil Payne and Eddie Henderson, Mike Ledonne, Mike Dirubbo, Mike Ledonne, Mike Ledonne and Mike Hazeltine. In 2000, a musical project with Pat O’Leary, Harry Whitaker, and David Schnitter was started. It only had limited performances and recordings. His first two recordings were released immediately commercially. Double-Time Records released The Returnsman in 2001. The Sound of Harry Whitaker, a trio effort, was released by Fresh Sound records in 2002. John Hicks and Bob Cranshaw also performed. Craig vanished briefly between 2004 and 2005, and then moved to Portland, Oregon, to reexamine and practice his music. Craig returned to Chicago in 2005 as a member the Cedar Walton quartet/quintet with Vincent Herring, Steve Turre and performing at Lincoln Center’s Dizzy’s Club. Presently composing and developing a unique sound. Also performing with Earsight (a trio featuring Paul Odeh). from http://craigwuepper.com