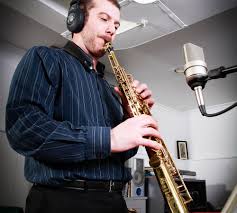 Craig Yaremko performs on all saxophones and flutes. “An artist with a strong musical personality. “(Whose) originals, that touch on jazz tradition while also looking ahead, are rife musical adventures.” (Newark Star-Ledger). Craig’s varied musical tastes have lead to performances with top-class jazz, classical and rock artists. He has quickly established himself as one the most versatile and exciting young musicians in the New York-area music industry. He has developed a unique, but distinctive, approach to music composition, performance, and education, which he delivers inspiring performances onstage as well as in the classroom. Craig is a native of Clifton in New Jersey. He received his M.A. His B.F.A. in Music Education was from Montclair State University. The New School University offers a Jazz and Contemporary Music Performance degree. Craig was fortunate to have the opportunity to study with some of the greatest jazz musicians, such as Joanne Brackeen and Jane Ira Bloom. He also studied conducting under Dr. Thomas McCauley and Dr. Craig Kirchhoff. His primary woodwind and saxophone teachers in his early years were Mark Friedman (who was also influenced by Joe Allard) and Ken Hitchcock. Craig has performed with jazz musicians Gerri Allen and Helio Alves, Tim Armacost. Don Braden, Paul Bollenback. Paulo Braga. Dee Dee Bridgewater. Dee Dee Bridgewater. Candido. He is well-known for his superb section playing and has performed with many of New York’s best big bands. This includes a nearly nine-year stint as the lead alto saxophonist in the Cecil’s Big Band, which was directed by Mike Lee at the now-defunct Cecil’s Jazz Club. Tommy Igoe, the Birdland Big Band and Diane Moser’s Composer’s Big Band are just a few of his other big band performances. He also performed with the BMI Composer’s Workshop (with Mike Holober, Jim McNeely and Michael Abene), and the Bill Mobley and Russ Speigel bands at Cecil’s Jazz Club. His performances were featured in the Wall Street Journal as well as on ABC’s Nightline. Craig has been featured on many albums including The Crooked Line (2006), Coin Flip (2010) and The View From Afar (2006), as well as three albums with Nathan Eklund (Coin Flip, The Crooked and The Crooked Line (2007)), and three with the Michael Treni Big Band (“Pop Culture Blues”, “Boys Night Out” (2012), and Turnaround (2009). All featuring Jerry Bergonzi and Willy Dalton, and the Real Deal Big Band (Real Deal Big Band 2012). Craig is a truly diverse musician. He has performed with the New Jersey Symphony Orchestra and New York City Symphony as well as numerous Off-Broadway and Broadway pit orchestras. He has supported Clay Aiken and Frankie Avalon as well as Lou Christie and Linda Eder. Yaremko has been leading his own groups since 2001. Craig Yaremko Organ Troo is his latest project. This sees Craig pushing the boundaries of tradition. The soon-to-be released recording features Matt King, Jonathon Peretz, organist, and Vic Juris as they explore originals, contemporary arrangements, and classics by Strayhorn, Monk, Strayhorn, and Fats Waller. Hot House magazine named Sync as one of the Top Ten CDs in 2007 and this recording is the follow-up to that critically acclaimed album. Craig Yaremko, a committed educator and a strong believer in the importance of preserving the art form and giving back the next generation, is a firm believer. Craig Yaremko is currently the director of the instrumental music department at Holdrum Middle School in River Vale (NJ), where he directs various chamber groups, including the Concert Band and 6th Grade Band. He is an adjunct professor at Montclair State University where he teaches Woodwind techniques. He was the conductor of the NJ Region I Saxophone Ensemble in 2012 and has given clinics all over the New York Metropolitan area about jazz improvisation as well as woodwind performance. from http://www.craigyaremko.com