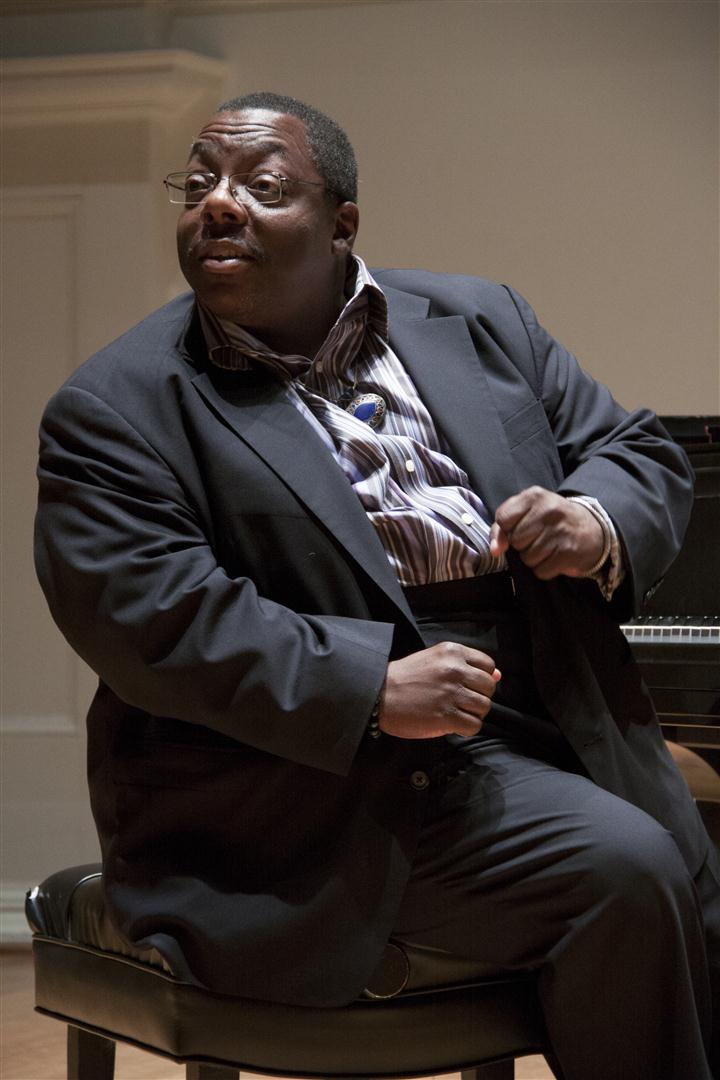 Born in Baltimore, MD on January 17, 1963. He is the son of Flossie, a retired postal worker, and a church organist. The soulful jazz pianist Cyrus Chestnut may be the best example of the positive impact music has on babies while they are still in the womb. Or, he simply had a passion for music all his life. Chestnut was born to a postal worker and a son of a minister. His father was also the organist at the Baltimore church where he grew up. Young Cyrus’s home was filled by the sounds of gospel music, as well as jazz records by Jimmy Smith and Thelonius Monk. Chestnut claims that his love for music was rooted there. To this day, Chestnut’s ties with the gospel church are still strong. Chestnut said that gospel music was the first thing he heard as a child. Chestnut, a three-year-old boy, reached for the keys of the piano before he was able to walk. His father taught him how to play the piano. Cyrus was a child when he learned “Jesus Loves Me” as one of his first songs. Cyrus, seven years old, was already playing piano in his family church. By age nine, he was a church pianist at Mt. Calvary Star Baptist church in Baltimore, Maryland. Chestnut is well-known for his unique jazz-gospel, and bop styles. While Chestnut was raised in gospel, his love for jazz grew from his time at church and at home. Young Chestnut bought his first album, Thelonious Monk’s Greatest Hits, with his two-dollar allowance. He did this simply because he liked its cover and that was how his love for jazz began. Chestnut, then nine years old, enrolled in the prep course at the Peabody Institute. After graduating from Peabody Institute in Baltimore, Chestnut went to Berklee College of Music where he received a degree as a jazz composer and arranger. Before graduating from Berklee College of Music in 1985, Chestnut was the Eubie Blake fellow in 1982, the Oscar Peterson scholarship 1983, and the Quincy Jones scholar 1984. Chestnut spent his time studying the history of music, the works of Wynton Kelly and Bud Powell, as well as the gospel artists Clara Ward and Charles Taylor. He studied classical music, performing and writing in school. According to a Warner Jazz article, Chestnut was described by the New York Times as an “intelligent improviser” with “one of the most shrewd senses of jazz swing.” After graduating from Berklee in 1986, Chestnut worked with Jon Hendricks, a jazz vocalist, from 1986 to 1988, and Terrence Blanchard, a trumpeter, from 1988 to 1990, before joining Wynton Marsalis, the jazz legend, in 1991. Chestnut was a true entrepreneur when Betty Carter, a jazz singer, came to perform at Berklee. The audience erupted in a horde of suggestions to help the singer, who was left without a pianist. Chestnut was then ushered onto the stage. Chestnut, terrified and nervous, took to the stage. However, when Carter asked him to play Body and Soul, Chestnut incorrectly played it in C. Chestnut was able to graduate from Berklee after a brief stint on a Caribbean cruise ship with a band featuring Joe Williams, Dizzy Gillespie and Tommy Flanagan. Cyrus was able to repay Carter in 1991 when he went on two-years of touring as the pianist for The Betty Carter Trio. Chestnut explained to the Santa Fe New Mexican that Carter wanted Cyrus to develop a new mode of creating and not re-creating. He often stated that Carter’s playing was like graduate school. Chestnut believes there has been a strong connection between jazz music and God. Chestnut believes that jazz is a religious musical genre. “I believe that the ability to play music is a gift of God. Every time I play, it’s a blessing. He explained to Down Beat magazine that every time he sits down to play, it is worship and expression for him. This connection is evident in the title of Chestnut’s debut major label album, Revelations. He released it in 1994, at the age of thirty. The Village Voice voted it the Best Jazz Album. It soared to the top of the charts and exceeded all expectations for piano trio recordings. Before that, Chestnut had stepped out of his roles as an accompanist or band member and formed and led his own trio. Chestnut’s trio released two albums on Japanese label Alfa Jazz in 1992, The Nutman Speaks, and The Nutman Speaks again. Evidence also released Nut in 1992, and Another Direction in 1993. Atlantic Records released Dark Before the Dawn in 1994. It’s a musical tale about me. It’s about my life experiences and how I felt at that time. And my reactions. Life isn’t all about one thing. Chestnut explained to the Philadelphia Inquirer that life is full of many different events. The album reached the sixth position on the Billboard Jazz Charts. The album was critically acclaimed the next year by Chestnut, who also composed nine of the eleven songs on Earth Stories. His skillful versatility, ability to blend sounds, and willingness to bring gospel into club performances have earned him a reputation. He is a jazz enthusiast and takes jazz seriously, despite his playful nature. “Just like Bruce Springsteen’s ability to reach a large audience, I believe jazz can do that.” The power of this music is something you can’t underestimate,” Chestnut said to the St. Petersburg Times. Chestnut has collaborated with many artists over his career. These include saxophonists James Carter and Donald Harrison, as well as trumpeters Roy Hargrove, Freddie Hubbard, jazzman Chick Corea and the Chicago Symphony Orchestra. He also tours with Kathleen Battle from 1995 to 1995. Recent collaborations with Chestnut include Anita Baker and Bette Midler as well as Isaac Hayes and Brian McKnight. He collaborated with Williams and McKnight on a revised version of Vince Guaraldi’s A Charlie Brown Christmas in 2000. His 2001 album, Soul Food, was a great example of his versatility. It is a mix of jazz, classical and gospel music.