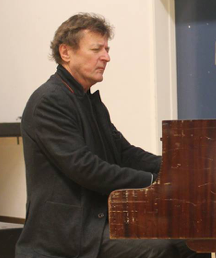 Dag Arnesen is a pianist/composer who was born in Bergen. It’s a beautiful, west-coast Norwegian city. Else Haadem Erstad started him on classical piano lessons at seven years old. At sixteen, he performed Beethoven’s Piano Concerto No.1 as soloist with Bergen Philharmonic Orchestra at De Unges Konsert. He studied classical piano at the Music Conservatory of Bergen, where he was accompanied by Jirij Hlinka. Jazz became his main interest as he grew older. Dag began his professional career at Bergen’s main theatre Den Nationale Scene as a musician. He has been a leader of many jazz groups, including quintets and quartets, as well as a sextet, septet, and a sextet, since the mid-seventies. He has also been a leader of larger groups, including a nine- or thirteen-piece band. Nearly all the music played by these groups was composed or arranged by Dag. Dag has been asked to compose music for various ensembles, big bands and choirs. He also has music for three movies. As a leader, he has released 11 CD/LPs and been a sideman for many others. Arnesen is a frequent guest at jazz festivals in Norway where he has toured extensively. He has also toured Europe performing at festivals and concerts, as well as in New York, Canada, Japan, China and India. While Dag has lived most of his adult life in Bergen, he also spent ten years in Oslo. He had the chance to perform with some of Norway’s finest musicians during that period, such as Knut and Odd Riisnaes and Jon Christensen. He has performed with Joe Henderson and Elvin Jones, Phil Woods. Philip Catherine, Carla Bley. John Surman. Paquito de Rivera. Maria Schneider. Jerry Bergonzi. Adam Nussbaum. Gustavo Bergalli. Dag is currently involved in the following projects: Dag Arnesen trio * Sigurd Ulveseth Quartet * Wenche Gausdal Quartet * Bergen Big Band. – www.mulemusic.no