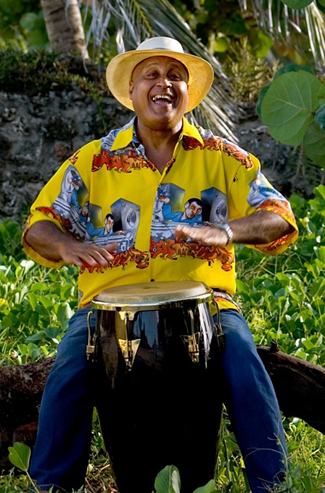 Daniel Ponce was a star percussionist, one of the best to come out of Cuba since the glory days of Chano Pozo and Candido Camero. He displayed rhythmic mastery in both traditional Cuban sounds as well as contemporary African-American rhythms. Ponce’s grandfather, a well-known bata drummer, gave his grandson his first training. Ponce was 11 years old when he played cowbell in Havana with Los Brillantes. As a teenager, he switched to congas and began playing with Comparso Federacion Estudiantil Universitario. In 1980, he arrived in America and quickly moved to New York. Andy and Jerry Gonzalez invited Ponce for a sit-in at the Village Gate where he met Paquito D’Rivera, a saxophonist. Later, he played on two d’Rivera albums and did sessions with Eddie Palmieri. Ponce was really helped by Bill Laswell, producer and bassist. Ponce was able to book a session with Herbie Hancock, which led to the commercially and critically acclaimed release Future Shock in mid-’80s. Ponce was a participant in several sessions with OAO and Celluloid and released his first session as a leader in New York Now! 1983. Arawe was his next release in 1987. Chango Te Loma followed in 1991. Ponce was also a leader of two New York groups, New York Now, and Jazzbata. He also did a lot of session work on dates that were led by others. Allmusic