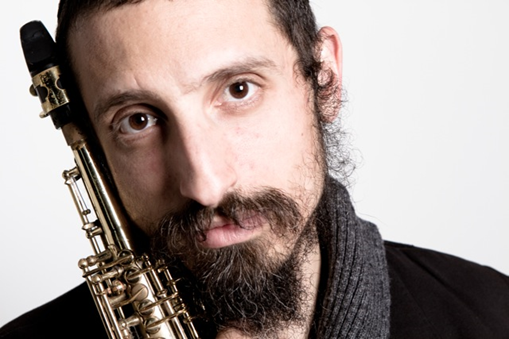 Danny Zamir, Alto Saxophonist, plays jazz that draws from both klezmer and Ornette Coleman. Zamir was born in Tel Aviv, Israel around 1980. He began studying the instrument when he was 12. He was astonished to hear Charlie Parker play. From that moment on, music education became his main focus. Zamir was a student at a Tel Aviv highschool that offered a rigorous music program and specialized in the arts. Some of Zamir’s first influences were Charlie Parker, John Coltrane and Ornette Coleman. Zamir started a band called Not for sale and began to listen to other musicians. Out of all the musicians Zamir heard, John Zorn, a saxophonist/experimenter, was his favorite. He moved to N.Y.C. in late 1998 with Shanir Ezra and Kevin Zubek, percussionists. Zorn is one of his many musical influences. Zorn has also collaborated with Zamir on occasion. SATLAH’s recording debut features a guest appearance from Zorn. It was released on March 2000 by the Tzadik label. It was followed by Zamir’s I Believe album, also on Tzadik, in 2008.