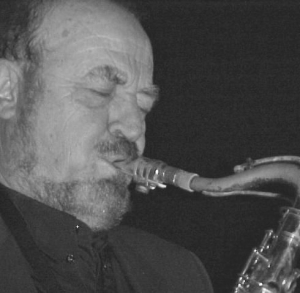 Danny Moss, a veteran swing-oriented tenor and talented musician, has been a key part of the British music scene since the 1950s. When he was 16, he began playing professionally and has been associated with many of the top names in England’s jazz scene, such as Ted Heath (1953-1955), Johnny Dankworth (1957-1961), Alex Welsh (1962-1964), and Vic Lewis. Moss is a fine, thick-toned tenor, in the style of Coleman Hawkins. He has been frequently called upon to perform with touring American jazzmen, including Buck Clayton in mid-’60s. Since the 1960s, he has been leading his own bands on and off. He also does extensive freelance work (including with the Pizza Express All-Stars of the 1980s and his wife Jeannie Lamb, a singer). After 1996’s “A Swingin’ Affair With Steamers”, Danny Moss moved to Australia in 1989 and still plays in Europe. Moss’ fifth studio album, Keeper of the Flame, was released in fall 2000.