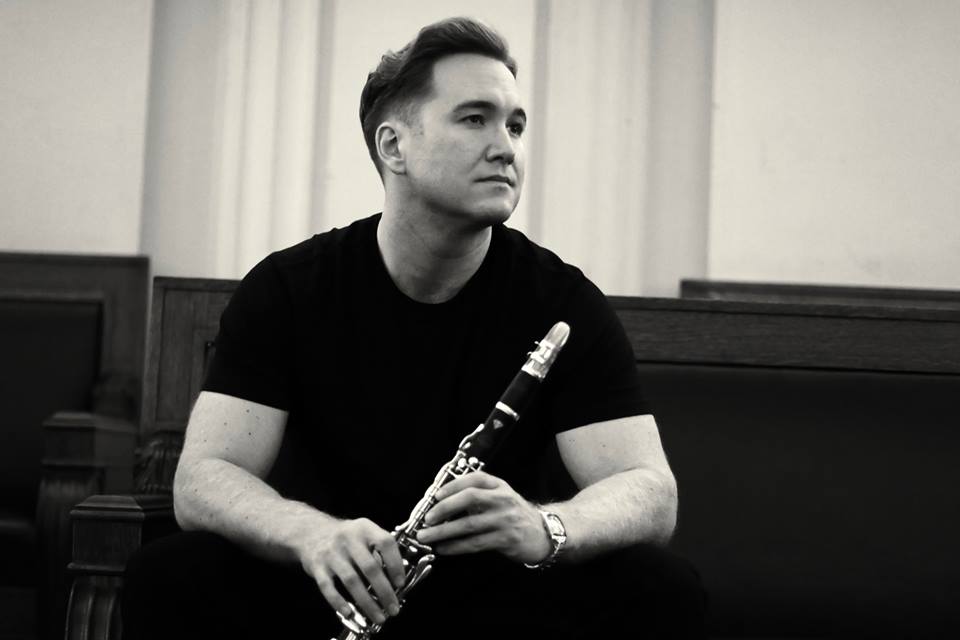 DAVE BENNETT is a Michigan clarinetist who is an authentic musical prodigy. He brings to life the classic sounds and music of BENNY GOODMAN (1909-1986), with amazing technique, style and beauty of tone. Dave, a true “young phenom”, resides in Waterford. He was born May 18, 1984 in Pontiac (MI) and started playing clarinet at the age of 10. After listening to a tape from his grandfather, he learned how to play Goodman songs by himself. Dave made his debut as a “featured guest” at the 5th grade band concert, playing Bei Mir Bist Du Schoen. Dave was 12 years old when he was invited to the Sweet Basil jazz club’s bandstand to play with Doc Cheatham, the trumpet legend. Dave was a young “road warrior”, as he started traveling across the US in his 14th year with several Michigan-based Dixie bands. He also participated in the “trad Jazz” festival circuit. Bennett, then 17, was chosen from 600 high school students to be a special guest soloist with the Count Basie Orchestra. Dave Bennett started touring with his Tribute to Benny Goodman trio in 2005. He has performed in more than 35 states and Canada, and has also appeared with thirty orchestras at “pops” shows. Dave will make his Carnegie Hall debut with Steve Reineke, the conductor of The New York Pops. The program features many Goodman songs, including Moonglow and I Got Rhythm, Sing Sing Sing Sing Sing Sing, Sing Sing Sing Sing Sing Sing, Airmail Specials, Poor Butterfly, Let’s Dance, and others. Bennett’s mature stage presence and knowledge of Goodman recordings dates and details, as well as his penchant to wear wire-rim glasses and spats, transport listeners back in time to Benny Goodman’s “swing era”. Bennett has made an impression on many of Benny Goodman’s most prominent band members. Vibraphonist Peter Appleyard and guitarist Bucky Pizzarelli all highly endorse Dave Bennett as being “the closest ever to Goodman’s sound and style.” They have performed in the USA and Canada, and he recorded with them on Dave’s Arbors CDs as “special guests”. Dave was featured on two NPR radio programs in December 2007 with The Jim Cullum Jazz band on Jazz at Riverwalk. Dave made his European debut at The Bern International Jazz Festival in Switzerland, April 2008. Some of his “swing clarinet” fan’s were surprised to learn that Dave is also a very good “rock-abilly” performer. His boogie-woogie playing, inspired by Brian Setzer, is what has earned him increasing fame. After their 2012 Sacramento Music Festival debut, Dave recorded with The Memphis Boys. Their CD features a lot of classic rock and roll from the Sun Records Studio in the early ’50s. Dave is a popular performer at “swing dance” competitions across the country. He is tall, handsome, and a natural on the microphone. His career is on the rise as he will now be the featured soloist in the Nov. 1 Benny Goodman tribute “Sing Sing Swing”, announced for Carnegie Hall with the New York Pops. Dave’s clarinet playing is a reflection of his mature personality at the age of 29. It evokes a unique and fortuitous blending between the sounds of Pete Fountain and Benny Goodman. The clarinet might be on the cusp of a young star. Only time will reveal where Dave Bennett’s unique musical talents will lead him. Note: Dave Bennett can be heard on Arbors Records: – Dave Bennett Celebrates 100 Years of Benny – Dave Bennett Clarinet is King: “Songs of the Great Clarinetists” from http://davebennett.com/bio.html