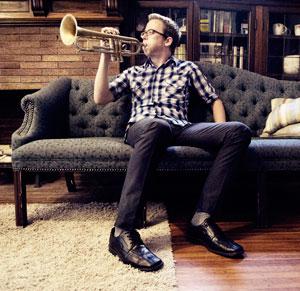 Dave Chisholm is an artist, composer, trumpet player, educator, bandleader, and songwriter currently living in Rochester, NY. He received his doctorate of jazz trumpet at the Eastman School of Music. The breadth of Chisholm’s artistic output is exemplified in a long string of widely varied projects including the big-band jazz of his debut album Radioactive (2010), the post-rock-meets-jazz-improvisation soundscapes on Calligraphy (2011), his soulful indie-rock singer-songwriter project Talking Under Water, the blistering straight-ahead jazz performed by Utah group John Henry, and the upstart jazz big bands Salt Lake Alternative Jazz Orchestra and Colossus. Dave is a respected trumpet player who has won international acclaim. He performed six nights at Umbria Jazz Festival in 2012 as part Ryan Truesdell’s “Gil Evans: Centennial” project. He was also one of two winners of the Downbeat Student Music Award in 2009 for outstanding collegiate soloist. He also won numerous awards and accolades at the Reno Jazz Festival as well as the University of Northern Colorado Jazz Festival. Dave illustrated and wrote his first graphic novel, “LET’S GO to Utah!” in 2009. He then continued with short comics in MYSPACE PRESENTS and Locust Moon’s Eisner Award-winning, “DREAM ANOTHER DREAMS” anthology. He is currently an instructor at State University of New York, Brockport and the Hochstein School of Music and Dance. His comics-meets music graphic novel soundtrack to Instrumental will be available in spring 2017 through Z2 Comics, Outside In Records, and other retailers. from www.davechisholmmusic.com