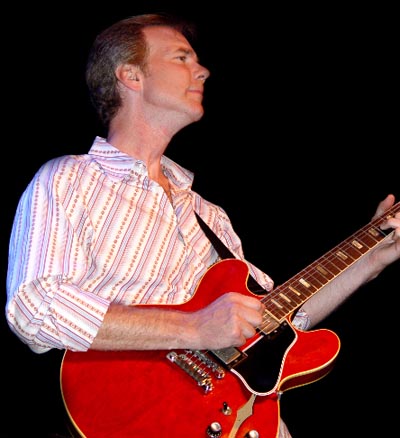 Dave Hill is one of the most popular and sought after instructors at Hollywood’s Musicians Institute, and has worked with Gregg Karukas, the original Rippingtons keyboard player, smooth jazz piano player, Scott Wilkie, and is featured on Theo Bishop’s, Native Language release, “Newport Nights” and Drummer Phil Maturano’s “Changes”. He is the author of the Guitar Vocabulary book called “The Lictionary” on Hal Leonard publishing, and as a staff transcriber for REH Guitar Education Videos he has worked with Scott Henderson, Robben Ford, Pat Martino, and Joe Pass to name a few. He also teaches atLos Angeles Music Academy in Pasadena, CA where the guitar program is headed up by one of his old classmates from his MI days, world class guitar extraordinaire, Frank Gambale. Dave is equally musical in both the funky and straight ahead, and his contemporary Jazz CD, “Two Seasons” is truly a work of a veteran musician with a lot say. from www.jazzguitarsociety.com