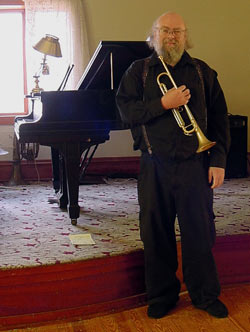 From 1991 until 2004 David Hoffman was the trumpet/flugelhorn soloist and composer/arranger with the Ray Charles Orchestra. During his stint with Ray, Dave has played extensively in Europe, North and South America, Africa and Asia, including Rays first trip to Russia in 1994 and the return visit in 2000, where he played with the Moscow Symphony Orchestra. He has also performed with the Los Angeles Philharmonic Orchestra at the Hollywood Bowl. He has appeared on television in France, Italy, Great Britain, Sweden, Norway, Denmark, Germany, Austria, Holland, Spain, Russia, Portugal, Japan, Argentina and Brazil, and in the United States has appeared on The Tonight Show on NBC, Live at Newport on PBS, Merv Griffins New Years Eve Celebration, The ABC 24 Hour Millennium Marathon, and the Fox TV special Ray Charles, 50 Years of Music, where he accompanied Stevie Wonder, Gladys Knight, Michael McDonald, Randy Travis and Willie Nelson. He has performed at most of the worlds major jazz festivals, including Newport, JVC, Nice, Antibes, Boston Globe, North Sea, Montreal and Montreux. Dave is a featured soloist on the DVD and CD “Ray Charles Live at the Montreux Jazz Festival” (Pioneer Artists PA-11676) During 2005-2006 David was Visiting Professor of Music at Knox College in Galesburg, IL, where he conducted the Knox Jazz Ensemble and the Cherry Street Combo. Dave also served as Musical Director for the 2006 Rootabaga Jazz Festival. David teaches trumpet, jazz piano, jazz combos and improvisation at Knox College. David has recorded with Paul Adams, Daniel Leahy, The Senses, the Stone/Bratt Big Band, the John Cooper Jazz Orchestra, Four Corners, and The Neurons. Dave is a Neuron. He is also a member of The Daniel Leahy Sextet and the Senses. He is a founding member of the Illinois Central Jazz Train and performs with the New York based quartet Four Corners. David is the President of the Peoria Federation of Musicians, Local 26, AFM. from www.davidhoffmanjazz.com