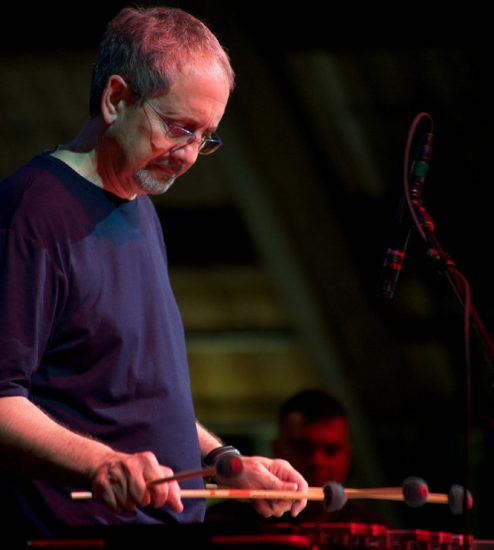 Dave Samuels, October 9, 1948 – April 22 2019, was an American vibraphone player and marimba player who worked for many years with Spyro Gyra, a contemporary jazz band. He was also known for his skill on the steelpan, a tuned percussion instrument of Trinidadian heritage. Samuels was born in Waukegan (Illinois). Samuels began playing the piano and drums at six years old. While a student at Boston University, he learned to play vibes and marimba. He continued his studies at Berklee College of Music in Boston and studied vibraphonist Gary Burton. Before moving to New York City, he taught percussion at Berklee. He was soon recording and performing with Gerry Mulligan and Carla Bley. David Friedman, his Boston teacher, was his guitarist and he formed a vibe/marimba band with him. They released albums under the name Double Image. He began recording with Spyro Gyra in 1979. He eventually became a member of that band in 1986, and remained with them through the 1990s. He recorded with Art Lande and Bobby McFerrin in the 1980s. He founded the Caribbean Jazz Project in 1993. Samuels was a columnist for Modern Percussionist, Modern Drummer and he also created an instructional video. Samuels has also taught at Berklee, the New England Conservatory of Music and other schools. Samuels, 70, died due to an unidentified long-term illness. The official Spyro Gyra Facebook page announced this on April 22, 2019.