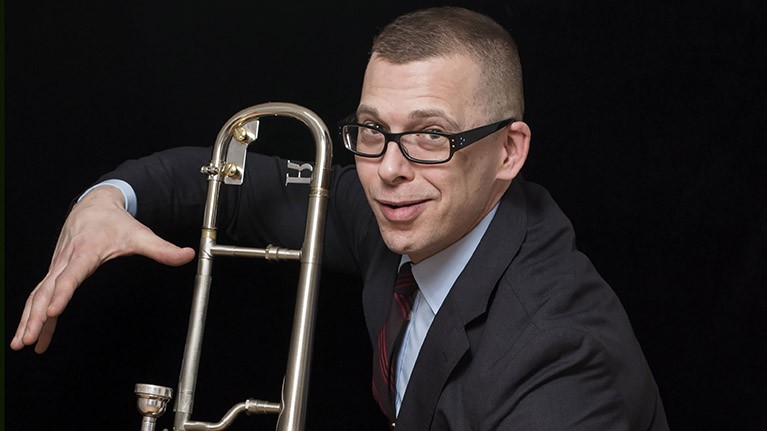 David Gibson is a trombonist and composer, arranger. He also teaches, directs, and leads bands. As a teenager in Oklahoma, his passion for music ignited. He continues to be inspired by the supportive jazz community based in New York City and surrounding areas. Slide Hampton, a legendary trombonist/composer, said that David Gibson was “one of the most talented, truly dedicated musicians in New York today.” Gibson began his career in New York performing with Mr. Hampton as well as Roy Hargrove and Jimmy Heath. He was a finalist at the 2003 Thelonius Monk International Jazz Trombone Competition. He has since released seven albums as a bandleader. His diverse groups, which range in size from a quartet or nonet, regularly perform at various NYC venues, including Smalls, Dizzy’s SMOKE, Fat Cat and the Django. They also feature his extensive library of original compositions and arrangements. Gibson’s compositions and arrangements have been used by many bands, including Roy Hargrove and Josh Evans, George Gee and Danny Aiello. You can hear his work as an arranger and composer on many recordings of Orrin’s GRAMMY-nominated Captain Black Big Band. He’s also a member of that band. The group’s 2020 album, “The Intangible Between”, which will be released on SMOKE Sessions, is their second GRAMMY nomination for the Large Jazz Ensemble category. David enjoys his role as a mentor and educator for many talented students through his teaching at New School University, Columbia University, Jazz House Kids and the New Jersey Youth Jazz program. He strongly believes that music can be a powerful medium of communication and provide vital nourishment to everyone. Curtis Fuller, a jazz legend, said that Gibson was one of the few young musicians who can speak the language of Jazz. From www.jazzbone.org