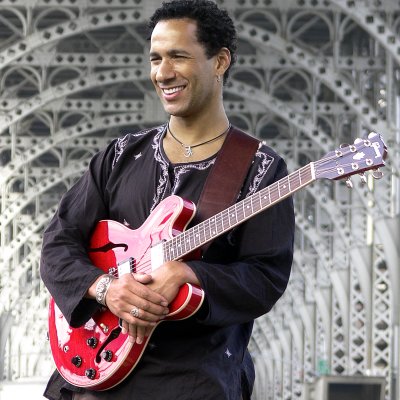 b. 5 February 1964, Cambridge (Massachusetts), USA. His father was a classical percussionist and Gilmore was the son of a musical family. He listened to his father initially, but by his teens, the guitar was taking over from drums. His brother Marque Gilmore took up the guitar. Although he was listening to and leaning towards funk and pop music, he began to gravitate towards jazz after a time of studying with Randy Roos and John Baboian. John McLaughlin’s Mahavishnu Orchestra was one of Gilmore’s early influences. Chick Corea’s Return To Forever was another. Joe Lovano, Jim McNeely and Gilmore also taught him at New York University. Gilmore was a member of Steve Coleman’s M-Base Collective in New York, where he discovered his passion for playing unusual music. Gilmore has collaborated with many artists from different genres over the years, including Muhal Richard Abrams and Cindy Blackman, Ron Blake and Uri Caine. He premiered his composition, “African Continuum”, in 2003 with the help of a Chamber Music America New Works Composer grant. Gilmore has been a part of a variety of bands. One was Kindred Spirits, which he formed with Aref Durvesh (tabla), Matthew Garrison (bass) and Marque Gilmore as drummers. He recorded Unified Presence with Jeff Watts in 2006, along with Claudia Acuna and Ravi Coltrane. Gilmore’s fluidity in both composed and improvisational music is notable for his exploration of the endless possibilities of rhythmic variations. (NB: Gilmore is not to be confused with David Gilmour, an English rock guitarist. Allmusic