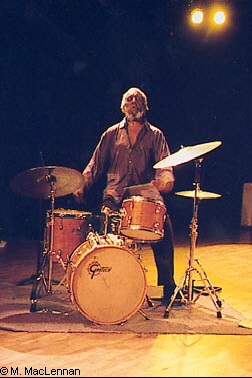 (b. (b. Charles immigrated to New York in 1945, but his Caribbean roots remain. He started by playing congas with calypso bands and mambo groups. He learned to play the drums himself and, a year later (1955), he was playing in Harlem alongside Cecil Taylor. The pianist also recorded his first album. He performed at the Newport Jazz Festival in 1957 with Taylor, Steve Lacy, and Buell Neidlinger. In 1961, he also appeared with Taylor and Archie Shepp as THE CONNECTION in the Living Theatre. He provided calypso music for Sonny Rollins in 1962. Charles was unable to keep up with the heroin addiction theme of THE CONNECTION, and he quit the music scene after more than a decade. In the early 1980s, he re-emerged in the Jazz Doctors with Billy Bang and Frank Lowe. He recorded BANGCEPTION in 1982, a charming duet album with Bang on the violin. Charles’s sharp, regular time is the perfect foil for wildmen like Taylor or Bang. He has the imagination and flexibility to answer their questions and keep them contained. Later recordings were made with Bang’s quartet (VALVE NO. 10) and Rob Brown ( BREATH ROME), were capped by his debut as a leader on 1991’s QUEEN MARIA. Denis Alphonso Charles Biography at Music Central ’96