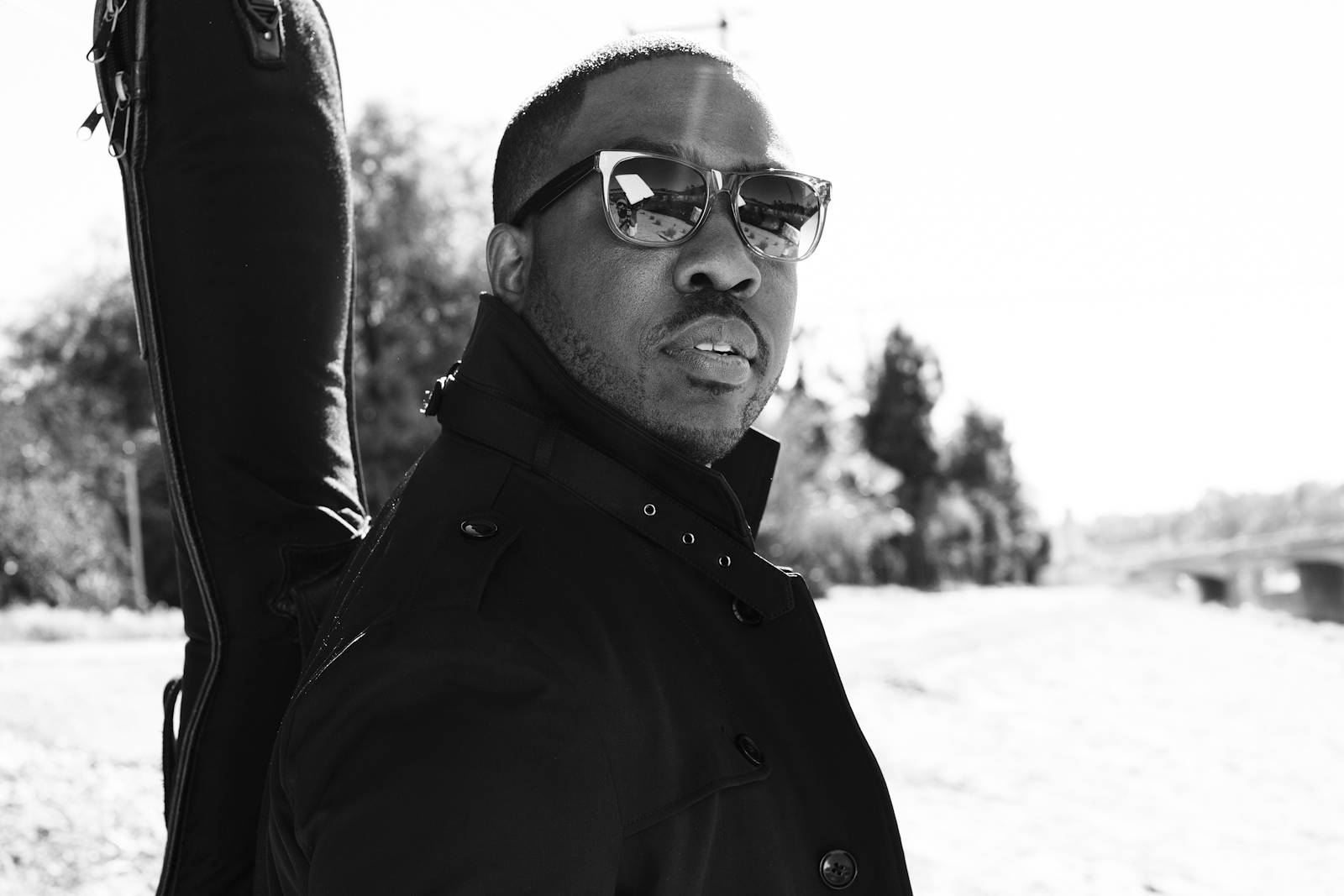 Derrick Hodge (Born July 5, 1979 in Philadelphia, Pennsylvania) is an American bassist, composer, and music producer. He is also the founder of Son of Knowledge Music and Son of Knowledge Entertainment. Derrick Hodge began studying electric guitar at the age of 7, inspired by the playing of West Philadelphia’s Beulah Baptist Church choir’s bassist, Joel Ruffiin. A year later, Hodge switched to electric bass guitar and began playing in the elementary school concert band and orchestra. In junior high, he was introduced to the upright contrabass. At the time, there were no bass instructors so Hodge learned the instrument by using his electric bass technique and by watching the first and second violins sitting across from him. And for jazz band, he just played the upright bass as if it were an electric bass, disallowing the lack of instructional resources to be his hindrance. He considers himself a product of a hotbed of talent from the greater Philadelphia region which had a thriving gospel, jazz, classical, R&B and emerging hip hop scene. He also credits mentors such as James Poyser, Jethaniel Nixon, and others throughout his teenage years. Hodge received his Bachelor’s degree in music from Temple University Ester Boyer College of Music where he studied Jazz Composition and Performance. He studied acoustic and electric bass privately with Vince Fay. He was also involved in the Temple University Jazz Band and Small Ensemble, conducted by Terell Stafford, and was the first jazz major to participate in the Temple University Symphony Orchestra, conducted by Luis Biava, and New Music Chamber Orchestra. He was also a student at the Jazz Aspen Snowmass Summer Academy, under the instruction of Christian McBride and Loren Schoenberg. Along with formal collegiate training and experience, he performed with the Temple University Gospel Choir, amongst other. Aside from Hodge’s performing side, he has always had a passion for music composition. Being granted the opportunities to write for artists in the past has enabled him to be identified as a writer in various genres of music ranging from jazz and orchestral chamber music to pop and R&B. Over the past few years, Hodge has been developing his writing skills for extended music scoring and film music. Understudying with Grammy-nominated composer Terence Blanchard, Hodge has been afforded the opportunity to learn about the film industry and writing process. He has also received on the job training while working as an instrumentalist on many of Blanchard’s films including She Hate Me, Waist Deep, and Inside Man. Currently, Hodge servers as musical director for the artist, Maxwell and has begun recording his first personal recording project featuring all original compositions. Known as a hybrid bassist as well as a solo artist, Derrick has performed and recorded with various artists including Common, Q-Tip (rapper), Kanye West, Timbaland, Jill Scott, Mos Def, Musiq Soulchild, Floetry, Gerald Levert, The Experiment Band (with Robert Glasper, Chris Dave, and Casey Benjamin), Anthony Hamilton, James Moore, Donnie McClurkin, Grammy award winning classical composer Osvaldo Golijov, and others. He has also toured and recorded with jazz artists including Clark Terry, Mulgrew Miller, Terell Stafford, and Terence Blanchard. He appeared on and composed for the extremely successful albums of the latter, Flow,[2] and A Tale of God’s Will (A Requiem for Katrina) (2007), which were nominated for a total of 4 Grammy Awards, winning one for Best Large Jazz Ensemble Album. He also appeared on rapper Common’s albums Be and Finding Forever, which also won a Grammy Award, playing bass and producing two tracks. Derrick was a contributing composer for the original musical score of When the Levees Broke: A Requiem in Four Acts, an HBO documentary produced by Spike Lee, aired in August 2006, as well as choral arranger for the ending credits of “Miracle At St. Anna” also directed by Lee. He was sole composer of the score for the documentary film Faubourg Tremé: The Untold Story of Black New Orleans[3] directed by Dawn Logsdon, co-directed/written by Lolis Eric Elie and released in 2008. Other film credits include music composer for The Recruiter directed by Edet Belzberg, as well as The Black Candle directed by M. K. Asante, Jr.. He has also written various compositions including “Infinite Reflections”, which was commissioned by the Chicago Symphony Orchestra and arranged for small brass ensemble. from wikipedia