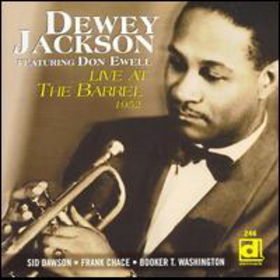 It seems strange that Dewey Jackson made so few recordings because he was one of the biggest names in St. Louis jazz of the 1920’s and was considered a legend for decades. Jackson played early on with the Odd Fellows Boys’ Band (1912), Tommy Evans (1916-17) and George Reynolds’ Keystone Band. After working on riverboats with Charles Creath, Jackson led his Golden Melody band (1920-23). During 1924-41 the trumpeter was a fixture on the riverboats, either heading his own groups (including the St. Louis Peacock Charleston Orchestra) or working as a sideman with Fate Marable and Charlie Creath. The one exception was a four-month stretch in 1926 when Jackson was with Andrew Preer’s Orchestra at New York’s Cotton Club. He was only a part-time player in the 1940’s, having a day job, but then worked fairly frequently in the 1950’s including with Singleton Palmer and Don Ewell’s Trio (1951). Jackson was active into the 1960’s. Dewey Jackson recorded just four titles as a leader (in 1926 including a classic “She’s Cryin’ For Me”), in 1927 he recorded with Charlie Creath and in 1950 appeared on a Singleton Palmer record. Among Jackson’s sidemen through the years were Pops Foster, Willie Humphrey, Don Stovall and Clark Terry (1937). from allmusic