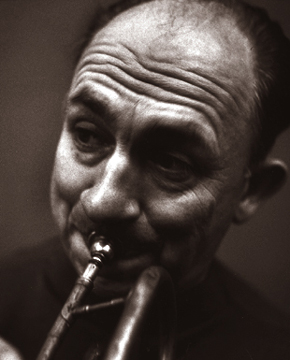 Paul Wesley “Doc”) Evans was an American jazz composer. He was born June 20, 1907 in Spring Valley, Minnesota and died January 10, 1977 in Minneapolis, Minnesota. Evans was the son a Methodist minister. As a child, he learned to play the piano and drums. In high school, he also played the saxophone. He received a B.A. from Carleton College. He studied English and joined the Carleton Collegians dancing band. In the 1920s, Evans gave up the saxophone to become a cornet player and continued playing Dixieland Jazz in Minneapolis. Evans played through the Great Depression and turned down offers to perform outside the Midwest. He recorded for Disc Records in 1947 and was the leader of the band that performed at the opening of Chicago’s Jazz Limited Club. He remained in Chicago until 1952 and then began a nationwide tour, recording often (especially for Audiophile Records). He returned to Minneapolis, where he continued playing jazz until his final recordings in 1975. He founded the Bloomington Symphony Orchestra, which he directed until his death. Minnesota’s Doc Evans Jazz Festival was established in 1999. From Wikipedia