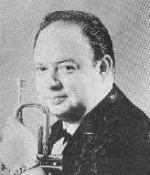 Don Goldie, one of the most prominent and versatile postwar jazz trumpet players, was a talented soloist with a broad range. He became particularly well-known in the late 1950s when he worked with Jack Teagarden. Donald Elliott Goldfield was born in Newark, NJ. His father, Harry Goldfield played trumpet with Paul Whiteman for many years, and his mother, Claire St. Claire was a concert pianist. Goldie began learning the trumpet, piano and violin as a young boy. He was good enough to receive a $1,000 scholarship for the New York Military Academy. Later, he studied with Nathan Prager, a member of the New York Philharmonic. From 1951 to 1954, he served three years in the Army. He did not serve in combat, but was forced to work on radio and television to create programs that recruited soldiers for the Korean War. After returning to civilian life, he moved to Miami with his mother to be near her. He appeared on Arthur Godfrey’s Talent Scouts as well as with Dave Garroway and won an award. After a gig with Bobby Hackett, he was invited to New York to perform more shows and recorded with Jackie Gleason and Neal Hefti. This led to Goldie being discovered by Jack Teagarden. In June 1959, he joined Bobby Hackett’s band. He was able to appear on the first Roulette Records recording, At the Roundtable. This record featured Goldie as both a soloist, and an integral part of the band. It was only two weeks later that he had joined. He continued to be with Teagarden through late 1962. He shared the vocals with him, including a spot-on impression of Louis Armstrong on-stage as part of “Rockin’ Chair” and also wrote a few pieces for the group. After Teagarden left, Goldie started his own band and was playing gigs in various jazz and pop idioms in the south Florida area, at various restaurants and hotels. In the early 1960s, Goldie recorded albums for the Chess Records Argo label and Verve label. He reemerged in the 1970s with his Jazz Forum label and cut eight LPs each dedicated to a single composer. In 1982, he released Don Goldie’s Dangerous Jazz Band on Jazzology. However, his declining health, mostly due to diabetes, forced him to retire from the game in subsequent years. Goldie died in 1995. Goldie was a notable soloist and one of the most talented of his time, but he never received the recognition he deserved, despite several very visible gigs. None of his albums had been released on CD as of 2005. However, his excellent work with Teagarden can still be heard on The Complete Roulette Jack Teagarden Session Mosaic Box, and the four Roulette albums are well worth searching out. Allmusic