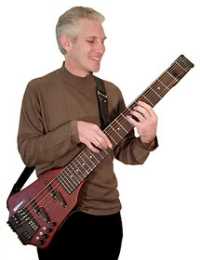 Don Schiff, born November 9, 1955, is a bass guitarist, Chapman Stick and NS/Stick player. He also plays the bowed guitar on recordings, TV, film sessions, and TV. He was a pioneer in the use of NS/Stick and bowed guitars. He was a pioneer in the NS/Stick, a technique that uses a carabiner to slide and tap. Schiff, a native of Wilmington, Delaware moved to Las Vegas in 1974 right after graduating high school. He quickly built a reputation at the age of 19 and was hired as the ‘housebassist’ for Flamingo Las Vegas. He played with such artists as Tina Turner and Elvis Presley as well as Perry Como, Perry Como, Perry Como, Peggy Lee, Tina Turner, Sammy Davis Jr., Ann-Margret and The 5th Dimension. In 1975, Schiff bought his first Chapman Stick and quickly developed his own style. He began to use it on live dates and recordings for many artists, including Eddie Money and Lana Lane. He met Patrick Sean Duncan, a screenwriter and director who hired him to score Live From Death Row (and Family Values). Since Pat Duncan cast him as a director in films that he directed, he can be seen briefly in those films. Emmett Chapman, Ned Steinberger and Ned Steinberger created the prototype NS/Stick in 2000. One of the prototypes was given to Schiff. It was his first attempt at a slide technique, which involved tapping with a carabiner and tapping while tapping. Pat Benatar recorded the song “Cerebral man”, which he co-wrote with Tully Winfield. For this album, Wide Awake In Dreamland, he was awarded a gold album. Schiff and Winfield also wrote the song “With every word” that Nia Peeples recorded on her self-titled album. In the Rocket Scientists band, Schiff plays NS/Stick. He composed the theme song for “The Guild” and scored music. Wikipedia