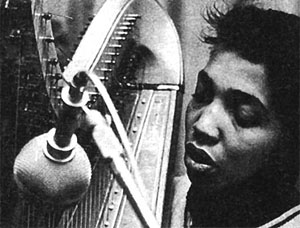 There are very few jazz harpists throughout history, and Dorothy Ashby is one of them. She was able to play a credible bebop on her instrument. She studied piano at Wayne State University and switched to the harp in 1952. Ashby began playing jazz within two years and made her first recording in 1956 as a leader. She was a session and studio player and led 10 albums between 1956 and 1970 for labels like Savoy, Prestige and New Jazz. In the 1970s, she moved to the West Coast and remained active until her death. Allmusic