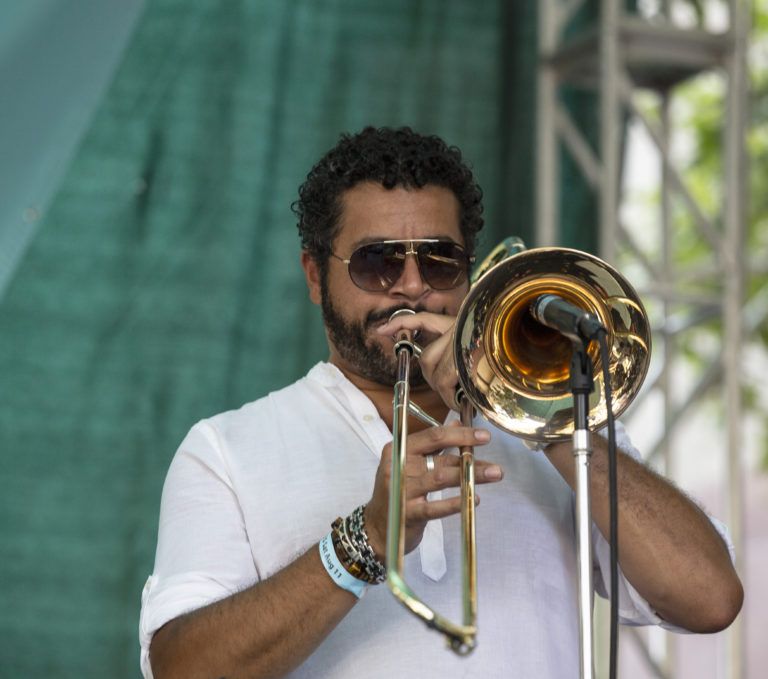 Doug Beavers was always involved in music, but his decision to go to Los Medanos College opened the doors to a career in music and eventually a Grammy(r). Luis Rovira was his grandfather and a well-known Spanish clarinetist. He toured South America with the orchestra. Doug was raised by musical parents who encouraged him to pursue music. Doug’s destiny was shaped by a chance he had in fifth grade. His music teacher was a trombone player in her college marching band. Doug would have her trombone and, if one behaved well, you could play the trombone. Doug was a natural and played with years of experience. Doug soon found himself playing trombone in Antioch High School’s advanced jazz band. He was also a participant in the annual Jazz Fest at LMC where hundreds of high school students from the Bay Area are mentored and critiqued by jazz musicians. Doug was not meant to be a musician. He was a strong student of science and math, and was destined to become an electrical engineer. Music was becoming an important part of his education. He was awarded the Distinguished Senior Award, which included a college scholarship, as he finished his senior year. He did not do well on the SATs, so he decided to stay home to finish his academics. Doug chose Los Medanos College, where he went on to blossom. He was able open up and made good friends. He was eager to be involved in LMC’s music program. He was a member of the LMC Jazz Ensemble’s concert band from the start. John Maltester, LMC Jazz Band Director instilled in me a strong work ethic and encouraged me to reach the next level. He was always available, and was a great counsellor. He helped me to see the world of musical literature. This was a new area for me.” John advised Doug’s parents about purchasing a trombone. This important purchase proved to be wise. Doug continues to play the same horn 12 years later, and expects to continue playing it for many more years. Doug says, “You don’t need to change horns as you improve your playing.” Doug was also influenced by Mike Zilber (LMC faculty member), who led a jazz improvisation studio ensemble. Mike would tell Doug, “Being an artist takes as much effort as being a doctor.” He showed Doug the realities of music and the world of the profession. He was the one who encouraged Doug to go to New York. It was an important experience for anyone who wanted to be a professional musician. Doug recalled his time at LMC and said that if he hadn’t had the two teachers and the encouragement they gave, he wouldn’t have been able to become a musician. Doug was heading to UC Davis with a full scholarship, and a plan for electrical engineering. Doug was playing better than ever before he began, as fate would have it. He just won the Pacific Coast Jazz Fest award and was awarded a scholarship to attend a Seattle jazz camp. As he drove home on Highway 4, he thought to himself “Maybe this is possible!” He decided that music was his destiny. His parents were supportive of his decision to change plans. It was a family tradition since his mother’s father, a musician, was also a member of his band. Two uncles also played in his band. All of them had attended the Barcelona Conservatory. Doug applied to Cal State East Bay (Hayward) with this newfound confidence. This is where he found a top jazz program. Doug excelled while there and received his bachelor’s in music. After graduating from the Manhattan School of Music, he moved to New York and continued his studies in jazz trombone and studio arranging. His reputation grew and he was offered the opportunity to perform in a variety of bands. He had the chance to transcribe and re-arrange classic pieces for Eddie Palmieri, a renowned latin pianist. This was his pinnacle experience. Doug was honored with a Grammy(r), for his co-arranging and performance on Eddie’s 2006 “Listen Here”. He has been involved in several symphonic commissions. These include a Frank Sinatra tribute performed by the Florida Orchestra, and a selection that was featured by the Honolulu Symphony Orchestra during a concert with Rosemary Clooney. The concert was recorded and released as The Last Concert (Concord) in 2003. This live album was nominated for a Grammy(r), one of four awards Doug Beavers has received throughout his career. Doug’s first CD “Jazz Baby” features a 24-piece bigband playing children’s popular songs. When it was released, it received widespread acclaim. His second album, “Two Shades of Nude,” (Doug Beavers Productions) was released in 2010. It received high praise from Audiophile Audition, allmusic.com and rose to #33 on the JazzWeek national radio play charts. Doug was a participant in the LMC Jazz Fest where he had the opportunity to mentor and judge the high school/middle-school jazz bands. Doug believes strongly in supporting young musicians. He saw young soloists performing and helped to decide which students would receive scholarships to LMC after high school. John Maltester was his mentor and former professor. He also performed with LMC Alumni Jazz Band. Doug was able to lead the Alumni Band in performing a piece that he wrote and dedicated to Maltester. Maltester was a mentor and inspiration to Doug during a crucial time in his career. Doug was an adjunct professor at Cal State East Bay for several years. He moved to New York City recently to help shape Harlem School of Urban Music and Recording Arts. He is the program director and strives to make it possible for NYC students to learn urban jazz, salsa and hip-hop through a program that teaches music theory.