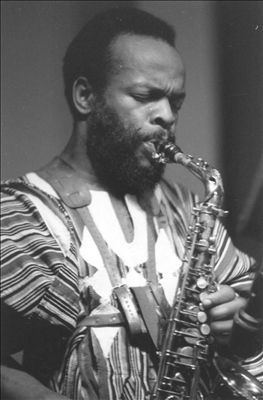 Douglas R. Ewart, who is perhaps best known for his work as a composer and improviser, sculptor, and maker of instruments and masks, is also an educator and lecturer and consultant to arts organizations. Over a 40-year career that has been acclaimed for its diversity and won awards, Douglas R. Ewart has combined his diverse talents into one sensibility. This is an antidote against the fragmentation and compartmentalization of modern life. He encourages and celebrates individuals within culturally active communities. Douglas R. Ewart was born in Kingston, Jamaica, in 1946. He immigrated to Chicago in Illinois, USA in 1963. His experiences with many people throughout the globe and his travels have confirmed that the world is interdependent. His 1987 U.S. Japan Creative Arts Fellowship, which he used to study Japanese culture and perform public performances in Japan, is an example of his efforts to both study and contribute to this interdependence. His multi-disciplinary work and encouragement of artist-audience interactions are part of his inspiration in America. This is the foundation of his teaching philosophy at the School of the Art Institute of Chicago. He has been teaching there since 1990. It also forms the basis of the perspective that he brings to his advisory boards for institutions like The National Endowment for the Arts (New York City), Meet the Composer(New York City) or Arts Midwest. To celebrate and build on the achievements of the Association for the Advancement of Creative Musicians, Mr. Ewart draws upon his experience as the chairman of the internationally renowned Association for the Advancement of Creative Musicians. Ewart has maintained several musical ensembles, including the Nyahbingi Drumming Choir, despite his administrative, teaching, and other duties. Douglas R. Ewart, Clarinet Choir