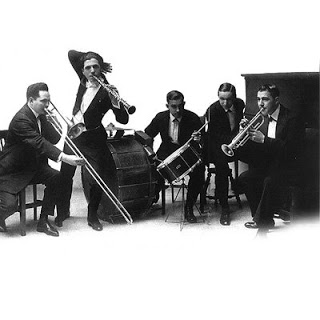 Earl Fuller (1885-1947), was an American pioneer in ragtime and jazz, a composer, and instrumentalist. Fuller was instrumental in establishing jazz as a popular genre in New York City just before the United States entered World War I. Fuller was also a talent scout and discovered Ted Lewis, Teddy Brown and Teddy Bear. Earl Bunn Fuller was born March 7, 1885 in Stonington Illinois. However, his family has longstanding connections to Warren County, Ohio. Although little is known about his musical training, photos of his jazz band show him sitting at the piano. Other accounts also identify him as a drummer. Fuller was hired as the musical director of Rector’s Restaurant in Manhattan’s theatre district in 1913. Other accounts identify him as a drummer. Ted Lewis’ unpublished autobiography states that Lewis and his clown band were performing at Coney Island’s boardwalk. This group was originally a circus band that included Walter Kahn, Harry Raderman, and John Lucas. At that time, the “clown” didn’t have a pianist. Fuller approached Lewis and his clown band towards the end, offering to hire them at Rector’s. It is still possible to see the September 1916 contract that Fuller and Lewis signed. This shows that “Earl Fuller’s Famous Jazz Band” was all signed into Rector’s. Fuller’s Jazz Band, which traded in their clown costumes for tuxedoes in September 1916, was an immediate success and made its debut at Rector’s a few weeks before the Original Dixieland Jazz Band’s acclaimed debut at Reisenweiber’s Restaurant, January 1917. The Novelty Orchestra–playing rags, schottisches, waltzes, polkas and two-steps–alternated sets with the more raucous jazz band. The jazz band was thrilling, but only the most skilled dancers could keep up with the tempo. The result was a balance between jazz’s revolutionary rhythm and more mellow material that was easier for dancers. According to the 1917 Christmas advertisement, Fuller also had two other groups: his “Celebrated Society Orchestra”, and his “Earl Fuller’s Combination Seven.” However, only one Victor side has recordings of the first group. On June 1, 1917, the Novelty Orchestra recorded their first recording for Columbia. Three days later, Victor recorded the Jazz Band. Fuller’s groups continued to record in the studios until February 1919, for Victor, Emerson, Emerson, Starr/Gennett, and Victor. Fuller was a pianist in the Earl Fuller Famous Jazz Band. There is some debate about this. Some sources claim that Fuller was Ernest Cutting. Fuller also wrote five Fuller Jazz Band titles that Fuller has been credited as author. Fuller published sheet music he had composed, but Lewis does not claim this in his autobiography. Ted Lewis has been criticised for his handling of the matter of removing himself from Fuller and Rector’s control. This included Fuller Jazz Band. Lewis wrote in his autobiography that Florenz Ziegfeld was offering him outrageous amounts of money to play at the Roof Garden at the New Amsterdam Theater. He and his jazz bandmates were not paid more than the other musicians at Rector’s. When his contract was up, Lewis decided to terminate it and the entire band, including Ernest Cutting, left Fuller. After only a month, Cutting returned to Fuller. Cutting’s composition Jazology, which was recorded in December 1919, was the last recording to Earl Fuller’s Famous Jazz Band. This disc was released on Arto as well as as an “Earl Fuller Record”, which featured Fuller’s photograph on the label. The latter is one the most rare of all early jazz records. Jazology was one of the 15 pieces in Earl Fuller’s Collection of Classic Jazz. It was published by an American Musicians Syndicate, a cooperative Fuller managed. The offices are located at 1604 Broadway. Fuller made the orchestral arrangements and Fuller brought Harry L. Alford from Chicago. Other pieces included were composed by Lou Gold and Irving Aaronson. The folios were released in conjunction with three Q.R.S. The folios were issued in conjunction with three Q.R.S. containing nine pieces. Rector’s decided to close its doors after the Volstead Act was passed in October 1919. Fuller led his bands on a tour of the United States, coast-to-coast, after making the Earl Fuller Famous Jazz Band’s final disc. Variety reported that Fuller was the “first big-time orchestra leader to enter the hinterland”. Fuller returned to New York and changed the name of his band to “Earl Fuller’s New York Orchestra”. He also established a booking agency for dance bands, which was primarily managed by Katherine. Fuller’s band stopped recording in 1921. However, Fuller’s booking agency continued to operate in New York until at most 1925. Fuller and his wife moved to Cincinnati in 1928 to continue their business, but it eventually failed. Fuller was then appointed manager of WFBF radio, Cincinnati. Earl Fuller, a local real estate agent, was working in Morrow, Ohio when he suffered a heart attack on August 19, 1947. Fuller was buried at Morrow Cemetery near the Fuller family plot, but not in it. From Wikipedia