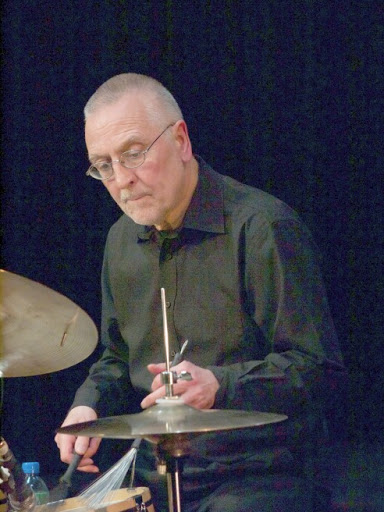 Eddie Prevost, the drummer, was born in England on June 22, 1942. He was a teenager who played in Skiffle and Trad Jazz bands, before he began to show signs of becoming a creative musician. Prevost was first exposed to Max Roach, Ed Blackwell and other great improvisers. Prevost began to incorporate non-traditional percussion into his drum kit. He co-founded AMM, an English improv group, in 1965 with guitarist Keith Rowe and saxophonist Leslie Gare. He recorded with the free jazz musicians Marilyn Crispell and Evan Parker. Prevost formed his own quartet in the 1970s and 1980s. He also recorded with Supersession and Resoundings. He formed the Masters of Desorientation with AMM alumni Gare, Rowe, and also entered the techno/ambient arena, performing with EAR, Main, and GOD. Prevost teaches workshops, gives lectures and writes about improv for various magazines when he’s not performing with these ensembles. Prevost also owns Matchless Records, his record label. Allmusic