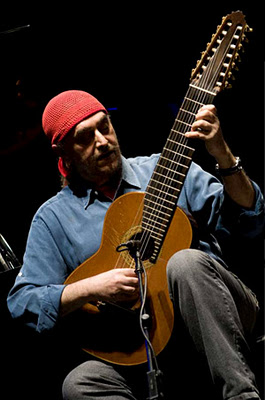 Egberto Gismonti, a Brazilian composer and guitarist, was born in Carmo (RJ, Brazil), in 1947. At six years old, he began formal music education on the piano. After 15 years of classical music studies, he moved to Paris to study under Nadia Boulanger (orchestration, analysis), and Jean Barraque (composer), a Webern and Schoenberg disciple. Gismonti saw a world that was more than the classical music scene after he returned to Brazil. Attracted to Ravel’s ideas for orchestration and chord voicings as well as “choro”, a Brazilian popular instrumental music that features a variety of guitars, Gismonti was also attracted to the idea of “choro”. He switched from the piano to the guitar to play this music, starting with the 6-string instrument and then moving to the 8 string guitar in 1973. He spent two years trying out different tunings and looking for new sounds. This is also evident in his use flutes, kalimbas. sho. He had already begun to create the foundation for his current concept in the early 1970s and was listening to music as diverse as Jimi Hendrix and Django Reinhardt. Hendrix’s accomplishments were proof that there is no distinction between the two types of music ….. He recorded many songs for ECM with Nana Vasconcelos in the 1980s. Although excellent albums like the Brazilian-released eponymous Egberto Gismonti have never been officially released in the USA, they are worth looking for. Discografia/Discography: Egberto Gismonti (1969) Sonho’70 (1970) Janela De Ouro (1970) Computador (1970) Orfeu Novo (1971) Agua