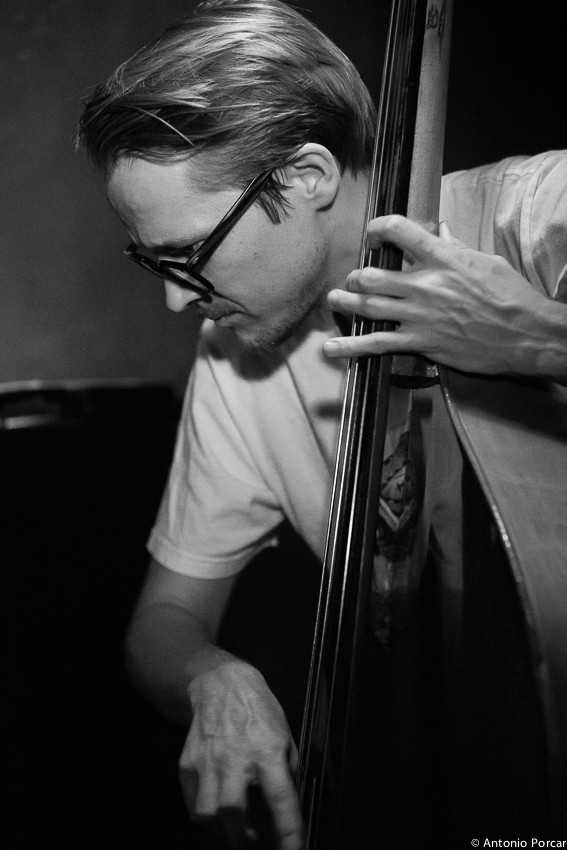 Eivind Opsvik, composer and bassist, was born in Oslo. His father was a great player of the saxophone, and he played records all over the house from Billie Holiday to Ornette Coleman. Eivind, his father and drummer, is seen playing “A Hard Day’s Night” in an early memory. A cousin, a denim-clad rocker, gave Eivind a bass guitar. He was amazed at his new ability to add pitch to rhythm. Opsvik spent his teens learning about the double bass and the 4-track tape recorder, as well as experimenting with music making. Opsvik started studying at the Norwegian Academy of Music in Oslo, where he studied classical bass. Opsvik was an active participant in Oslo’s jazz scene by the age of twenty-five. He played regularly with Christian Wallumrod and Paal Nilssen Love, as well as performing at clubs and festivals across Europe. Opsvik moved to New York City in 1998. He has been a successful musician since then, performing at a variety of venues such as Carnegie Hall, Village Vanguard and Le Poisson Rouge. He studied jazz at the Manhattan School of Music and made close friends with Jeff Davis, Loren Stillman and Jacob Sacks. Eivind invited these musicians to assist him in his solo project, Overseas, building on the musical understanding and bonds that he had formed at school. Opsvik stated that “overseas”, a way to describe his life, is “overseas”. He is never more than an ocean’s away from home, no matter where he lives. Overseas has had many lineups that reflect this deep loyalty to friends and loved ones. Long-lasting friendships, which go back to Opsvik’s early days in New York, were instrumental in the realization of his first record. Opsvik continued his journey through New York via late-night gigs and made connections with other musicians, visionaries who were skilled in classical, noise improv, electronic, Jazz, and jazz. These players were later added to the Overseas record. The band has been consistent since 2005. It features Tony Malaby and Jacob Sacks. In 2010, Brandon Seabrook joined the group. They have performed numerous shows in New York City over the years and extensively toured Europe, the United States east coast, and Europe. Opsvik’s discography includes four Overseas albums, extensive session work, and four Opsvik-produced chamber-pop records. These were made in collaboration by Aaron Jennings (under Opsvik).