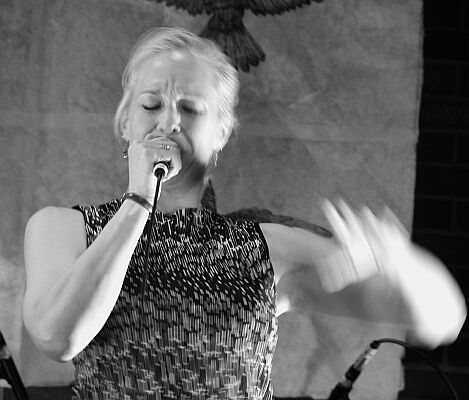 Ellen Christi has been a significant contributor to American jazz improvised music since the mid-seventies. Ms. Christi is a singer/composer who has performed in many venues, from solo vocal concerts to multi-media theatre productions. Her involvement in supporting emerging performers has been active through the support of organizations she co-founded and directed. Ms. Christi studied composition and piano technique with Jaki Byard (an internationally acclaimed pianist/composer) and was a professor at The New England Conservatory of Music. Galli Campi, a coloratura vocalist with the Metropolitan Opera, had taught her the bel canto technique. She studied vocal technique with Jeanne Lee, an avantgarde jazz singer, earlier in her career. Ms. Christi is currently working with Dr. Virgina, a vocal coach and composer, who was also the founder of New York Treble Singers. Ms. Christi is a co-founder of New York City Artists’ Collective. This non-profit organization encourages artist creativity and appreciation through education seminars and concert productions. Records She is also the founder and CEO of Network Records, an independent record company that promotes contemporary jazz music. The New York State Council of the Arts has awarded her numerous grants and commissions. Her most recent commission was funded by the Mary Flagler Cary Charitable Trust. She has received numerous commissions for theater and dance performances over the years. She is currently performing and teaching master classes in vocal technique/improvisation and movement throughout the United States and Europe. For the past 25 years, Ms. Christi has performed and recorded with musicians from the United States as well as Europe. She has had the pleasure of working with Ray Anderson, Ray Anderson and Mark Dresser. She has collaborated with Claudio Lodati and Enrico Fazio, Italy, for the past 12 years. She has performed and recorded in Switzerland with Thomi Hirt, Pit Gutmann, and the Illustrio trio. She is currently working with Joe Gallant’s Illuminati (a 22-piece ensemble), performing and producing concerts together with her current performing group, Aliens’ Talk. Vincent Nguini, Cameroon’s musician, is working with her on a global music project. The most recent recording project was with Habib Faye, bassist, and Babacar Konate, balafonist, from Senegal. She spends a lot of time as a producer at Bliss Corporation in Torino (Italy), which is a dance music production company. from http://www.ellenchristi.com