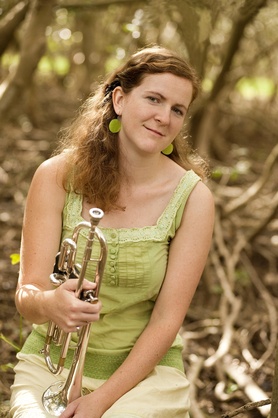 Ellen Kirkwood, born in Port Macquarie, Australia in 1985, is a trumpeter and composer, as well as a bandleader, teacher, and musician based out of Sydney. She earned a Bachelor of Music at Sydney Conservatorium, where she majored in Jazz Performance under the guidance of many Australian Jazz legends, including Warwick Alder and Judy Bailey. She was awarded the Jann Rutherford Memorial Award in Jazz for Young Women in 2012. This award included a recording at ABC Studios and project funding. There were also performances in Sydney and Melbourne. Kirkwood’s innovative and bold style is quickly gaining attention as a composer. The debut album, Theseus and the Minotaur, was released in 2013 by Captain Kirkwood. It featured a 5-part narrated music story suite that received rave reviews and critical acclaim. Since then, she has been asked to compose pieces for large ensembles. These include works that were premiered at the 2015 Sydney International Women’s Jazz Festivals. Ellen’s music was performed by Claire Daly (USA), and international jazz legends Lisa Parrott and Claire Daly. She has also been performed by local stars Sandy Evans, Paul Cutlan, and Matthew Ottignon. Ellen is currently the leader of two successful groups, Fat Yahoozah u0026 The Mieville Project. These are her vehicles for her compositions. Mister Ott, On the Stoop, Sirens Big Band and Sydney Women’s Jazz Collective are some of her favorite Sydney bands. Highlights of her performances include performing with Ingrid Jensen and Christine Jensen at 2016 Sydney International Women’s Jazz Festival. She also performed with Boy George, Hermitude and performed her [A]part Suite at Wangaratta Jazz Festival 2018. Sirens Big Band’s Trocadero at Sydney Festival 2012/2013 and Woodford Folk Festival’s New Years Eve Big Bang event. She is also the Young Women’s Jazz Orchestra’s director. Ellen was awarded a grant from the Australia Council of the Arts in 2016 for composition mentoring with Barney McAll, a highly respected Australian composer and pianist. She wrote a 55-minute suite for Sirens Big Band entitled “[A]part”, which featured some of Australia’s most acclaimed musicians, including Gian Slater, Sandy Evans, and Andrea Keller. [A]part was a finalist in the 2018 APRA Art Music Awards for Jazz Work of the year. Ellen was also a finalist in 2017 for the prestigious Freedman Jazz Fellowship. from http://ellenkirkwood.com