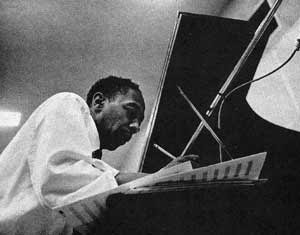 St. Elmo Sylvester Hope (June 27, 1923 – May 19, 1967) was an American jazz pianist, performing chiefly in the bop and hard bop genres. His highly individual piano-playing and, especially, his compositions have led a few enthusiasts and critics such as David Rosenthal to place him alongside his contemporaries Bud Powell and Thelonious Monk (one could also compare him to Herbie Nichols), but he remains less recognized than his colleagues. Hope began his career with the Joe Morris band. From 1953 he recorded in New York as a leader and as a sideman with Sonny Rollins, Lou Donaldson, Clifford Brown, and Jackie McLean, but moved to Los Angeles in 1957 after losing his cabaret card in New York City for drug use. He performed with Chet Baker before moving, and with Lionel Hampton after, and recorded with Harold Land and Curtis Counce in Los Angeles. He also recorded as a leader with Frank Foster, John Coltrane, Hank Mobley, Art Blakey, Paul Chambers, and Philly Joe Jones. Hope recorded on a number of occasions in the trio format and more rarely as a leader of a quintet for Blue Note, Prestige, Riverside and other labels. Disillusioned with the West Coast scene, Hope returned to New York in 1961, where he went to prison briefly on drug charges then returned to playing, but recorded more rarely. He was hospitalized with pneumonia in 1967 and died a few weeks later of heart failure. Later pianists who cite Hope as their main influence include bebop pianists Frank Hewitt (1935–2002), and Sacha Perry. Roswell Rudd composed a song for Elmo Hope named Hope No. 2. He called Elmo Hope (in a concert with Archie Shepp): “A great and fine composer and remains one of America’s well kept secrets”. Modern jazz guitarist Kurt Rosenwinkel has repeatedly mentioned Hope as an influence during seminars and interviews. His wife Bertha (Rosamond) Hope (born November 8, 1936) also a pianist, participated in a duo recording with her husband in 1961 and has released albums dedicated to her late spouse’s compositions. from wikipedia