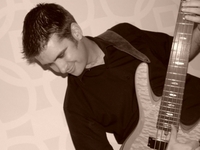 Eric Guy, originally from Montreal, Canada, was a member of several rock bands when he was a teenager. He then enrolled in Vanier college’s Jazz program. There he learned electric and acoustic basses with Vic Angelillo, arranging under Christopher Smith, and composition with Joe Sullivan. Jean-Sebastien Williams, a long-time friend and guitarist virtuoso, and Simon Angell (Patrick Watson), were his first musical influences. He also played with the CJAD All-City Big Band, under Denis Christiansen. He has been playing in all kinds of music from hip-hop and gypsy music to name a few. His singles, El Verso, have received a lot of airplay in the Hip-Hop/RnB scene. Between 2002 and 2007, Eric cruised the high seas as a bass player on luxury cruise lines Celebrity Cruises and Crystal Cruises. This culminated in him being appointed band master and musical Director for the Crystal Symphony in 2006. He continued to study privately with Rufus Reid, David Friesen, and the UK’s electric bass virtuoso Janek Gyzdala. He became interested in composition and orchestration and began to study the music of Schoenberg and Shostakovich. Eric Guy moved to London in 2008. Since then, Eric Guy has made his mark in the Jazz and Pop worlds. He played with Mike Coates, Anton Browne and Duncan Eagles on the jazz side, while also playing with Chris Madin (Strictly Come Dancing) and chart-topper DJ Ironik on the pop side. from http://ericguymusic.com