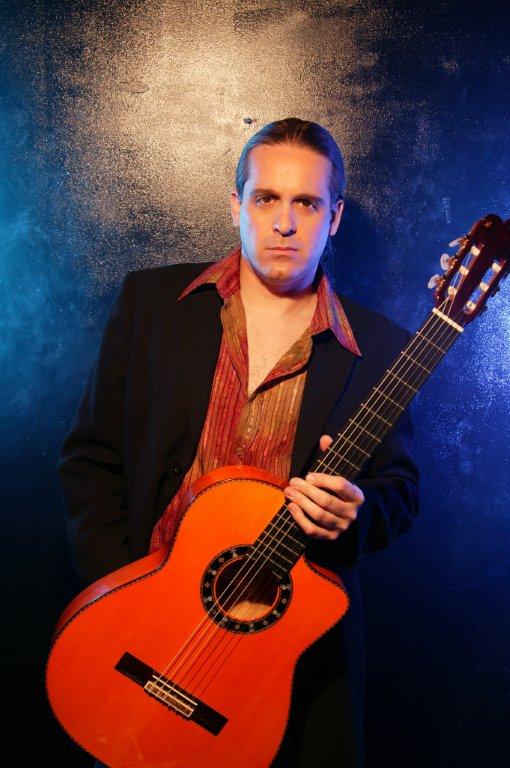 Eric was a fan of Classical, Jazz and Flamenco music from a young age. Eric was influenced by guitar legends such as Carlos Montoya and Al di Meola, John McLaughlin and John Williams throughout his childhood. Eric started playing the guitar when he was 14 years old and began performing in local rock bands by age 16. Eric studied Jazz and Classical guitar at Florida Atlantic University. Eric was the first guitarist to successfully complete the Honors Performance program at F.A.U. He graduated in 1996 with academic honors. Eric studied Flamenco and Latin American music while in college with musicians from Peru and Spain. Eric started his solo career in 2001 and signed his first distribution agreement with Neurodisc Records. Without Words and Romancero, Eric’s first two albums, were both included on Billboard’s Top 25 New Age Music Chart. Eric’s third album Colores del Alma was followed by continued success. Eric’s popularity grew as he continued to perform at local venues. Eric recorded his first three albums in the Spanish guitar style. He then decided to record a classical guitarist album called Across the Universe: A Beatles Journey. This album is a tribute and original arrangement for classical guitar. It continues to be a popular seller on iTunes. Eric continued to show his versatility with the release of his fifth album, Smooth Jazz entitled 360 Blue. This album features collaborations between Marion Meadows, a renowned soprano-saxophone player, and some of South Florida’s best musicians. Eric released String Theory, his sixth album in March 2011. String Theory features bold melodies mixed with soaring improvisations. It is a perfect blend of Flamenco and Jazz, as well as Latin and Middle Eastern music. Eric’s energetic rendition of Hotel California by the Eagles is included in this release. It has been a crowd favourite since its first performance. from http://www.nuevo-flamenco.com