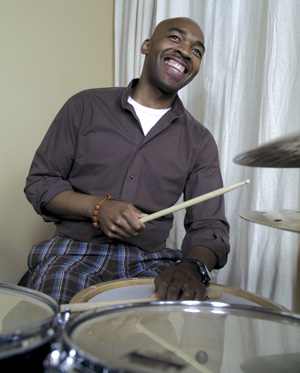 Eric Du’sean Harland is a composer and drummer who was born in Houston, Texas, but now resides on the east side. Education Eric Du’sean Harland began his professional career playing in local bands after he graduated from The High School for the Performing and Visual Arts. Eric was awarded the first chair with both the All State and Regional Jazz Bands in 1992-93. In 1994, he was awarded a Citation for Outstanding Musicianship by the International Association of Jazz Educators. Wynton Marsalis met Eric during a high school workshop and encouraged him to go to New York City. Eric graduated from high school and was awarded a full scholarship to Manhattan School of Music’s music program. Eric continued his studies at music school to study Theology at Houston Baptist University (College of Biblical Studies), in order to become an ordained minister. Eric has over 45 recordings to his credit with different artists. These recordings include “Let’s get lost”.