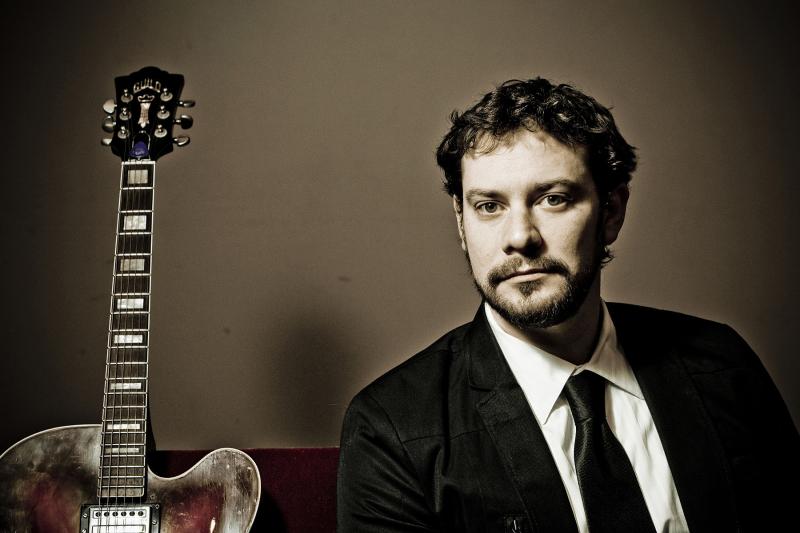 Eric Hofbauer, born in Rochester, NY on January 31, 1974, is a Boston based creative improvising and progressive jazz guitarist. He has performed in acoustic solo settings, collaborated with local musicians, and has played his share of bop and modern jazz, roots Americana and even country music. Hofbauer graduated from Oberlin College with a Bachelors Degree in Music, and a Masters from the New England Conservatory, where he was influenced by professors Paul Bley and Ran Blake. Now himself a prominent educator, he teaches jazz guitar, jazz combo and jazz history at the University of Rhode Island, and jazz history at Emerson College. The North By Northwest band, which he co-founded, has spun off into his most renowned group, the Blueprint Project, a collaboration with saxophonist Jared Sims and pianist Tyson Rogers that has also included bassist Cecil McBee and drummers Matt Wilson or Han Bennink. He has also worked closely with fellow Bostonians — jazz guitarist Garrison Fewell, in saxophonist Charlie Kohlhase’s Explorers Club — and he’s a member of the Gill Aharon Trio. Hofbauer has worked alongside Gunther Schuller, James Moody, Taj Mahal and Rebecca Shrimpton. Another project for Hofbauer is his Infared Band, and he founded and operates the Creative Nation record label. A solo guitar release American Vanity has him tackling music by Eric Dolphy, Erik Satie, and Waylon Jennings’ “Dukes of Hazzard” theme. His broadbased sound can be directly linked to improvising icons Derek Bailey, Loren MazzaCane Connors and Eugene Chadbourne. from allmusic