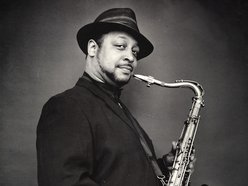 Eric Wyatt, a saxophonist, was born in Brooklyn, New York. Charles Wyatt, his father, introduced him to the saxophone. He played tenor and enjoyed playing with great jazz musicians such as Charlie Parker, George Braith and Wilber Ware. Eric was privileged to have met Miles Davis, his godfather, and Sonny Rollins, two jazz greats who changed his life. Eric recalls that he was only 10 years old when he met him. He was also playing trumpet at that time. I remember him playing at the Bottom Line in New York. He brought so much energy and joy to the crowd. Sonny was a good friend of my family. He remained close to us even after the death of my father. Eric also recorded his first CD with King Records (Japan), “God Son”, which featured Al Foster on drums, Rufus Reid as bass, and Mark Soskin, a pianist from Sonny’s group. Eric has been traveling around the globe as both a leader and sideman, and continues to build an impressive and solid resume. In 2015 Eric was invited by Sonny Rollins to perform at Kuala Lumpur International Arts Festival. performing music from his new CD Borough of Kings. He was also invited to perform at various jazz venues in Singapore during this tour. He was a guest speaker at several master classes and workshops at Lasalle College and the World Arts University. He was also a special guest of Christy Smith, master bassist at many venues Sing Jazz club and Blu Jazz. He was also invited to perform at Apollo for the Sonny Rollins lifetime achievement award where he performed alongside Rene Mclean and Kenny Garrett. Youtube has a Dont Stop the Carnival 2015 video. He has recorded and played on records with Jeff Tain Watts and Robert Glasper as well as Wynton Marsalis and Roy Hargrove. Eric has performed in Japan, Shanghai and Hong Kong, Singapore Malaysian, Singapore Malaysian, Athens (Thessaloniki Greece), Nice, Paris, France, and Larry Willis, Stephen Scott, Justin Robinson, among others. As a leader, he has recorded five CDs: “God Son”, King Records Japan, “Live at the Half Note”, and “The Blue Print”. His new CD entitled “From the Borough of Kings” is on Positone records an was voted one of the best cds of 2014 on several jazz list www.burningambulance.com. Upon his return to the US from Singapore he recorded a new cd which features Grammy nominated pianst Benito Gonzalez, Eric Wheeler bassist with Dee Dee Bridgewater, Shinnosuke Takahashi drums, Keyon Harrold trumpeter from the new Miles Davis documentary an Kyle Poole drummer from the Thelonious Monk competition from www.ericwyatt-music.com