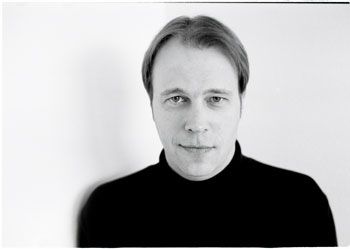 Musician, record producer and author Erik Honoré (born 1966) has contributed as a musician and producer to more than 50 records with artists as diverse as David Sylvian, Eivind Aarset, Arve Henriksen and Brian Eno/Peter Schwalm. “Heliographs” is, astonishingly, his first solo project, and one can only speculate as to why this is the case. This is a well-integrated and personal debut album that opens up a complete world of sound that the listener can hardly bear to leave behind. In the early 2000s Erik Honoré had three books published. According to him, the titles and narrative on “Heliographs” were derived from elements in the first novel he published, “Orakelveggen”. “The album title comes from the opening chapter of the book, which is a fictional account of the development of the very first photograph. The inventor Joseph Niépce called this process heliography, which means sun-writing.” Many people associate Erik Honoré with the Punkt Festival and Honoré’s collaborative partner Jan Bang. They are both artistic directors, and have known each other and worked together since they were teenagers. “We met through our common interest in artists we later got to know through the Punkt Festival and other collaborations: David Sylvian, Brian Eno, Jon Hassell, and Laurie Anderson,” says Honoré. In 2005, together with Bang, Honoré established the Punkt Festival in Kristiansand, where concerts that have just taken place are remixed live in another room. The idea is to improvise with sampling. “This turned out to be a completely new, original and effective way of creating music, and the concept has obviously been interesting for both musicians and audiences,” says Honoré. In recent years Punkt Festival spin-offs have taken place in Paris, London, Tallinn, Wroclaw and several cities in Germany. A long list of Honoré’s regular collaborators from Norwegian improvisational music’s top echelon appear on “Heliographs”, including Ingar Zach (Huntsville, Dans Les Arbres), Eivind Aarset, Jan Bang and Arve Henriksen, in addition to the Dutch violinist Jeffrey Bruinsma from Zapp 4. from http://hubromusic.com