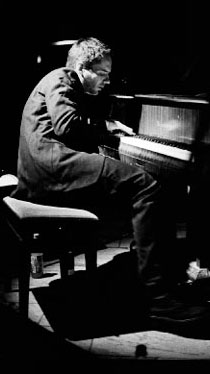 Norwegians know ERLEND SKOMSVOLL as a composer/arranger as well as a pianist. He has developed a unique rhythmic and melodic style over the years, making him today’s most popular arranger for Norwegian jazz and pop artists. Skomsvoll organized and led a concert featuring Chick Corea’s music at the Molde International Jazz Festival, July 2000. The concert featured big band “Trondheim jazz Orchestra” as well as Chick Corea as soloist. Corea had allowed Skomsvoll to use his music and was so pleased with the results that he went on a 2001-tour through Norway with Skomsvoll. Skomsvoll was able to replicate his success with a similar project he did in Molde with Pat Metheny the next summer. COME SHINE Skomsvoll’s playing of the piano is influenced by Bill Evans, Keith Jarrett, and Count Basie. from http://home.online.no/~livero/skomsvolle.html