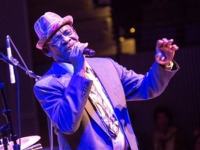 Ernesto Oviedo, a 78-year-old Cuban master singer, is one of the most prominent boleristas (singer romantic ballads). He comes from a royal Cuban musical clan of soneros – he is the son of Isaac Oviedo, a pioneer tresero/composer and older brother to Buena Vista Social Club tresero Papi Oviedo. Although he is a Cuban-born son, his signature song is the Bolero. This bolero is a Cuban favorite and has been deeply developed in Cuba. Oviedo’s exquisite renditions and interpretations of classic boleros throughout Latin America place him among the top traditional singers today. Oviedo, Cuba’s most well-known professional singer who has toured the globe for over 60 years, was Cuba’s best kept secret. As they warm hearts, their Johnny Hartman-esque sound elicits awe. In March 2013, he performed two songs at the SFJAZZ Center (700 capacity) as a featured guest for John Santos’ Filosofia Caribena Project. This brought the audience to its feet and earned four standing ovations. He is currently a member the legendary Orquesta Estrellas Cubanas, which was founded in 1959 in Havana. Ernesto is on the brink of releasing Siempre Clasico, his debut CD, on John Santos’ Machete Records Label in February 2014. Ernesto’s music is as exquisite and refined as ever. from http://www.ernestooviedo.com